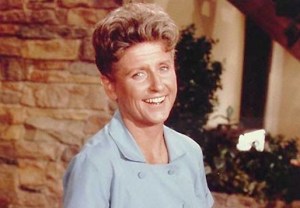 Ann B. Davis, best known as The Brady Bunch‘s housekeeper Alice Nelson, died on Sunday. She was 88.

A family friend told CNN that Davis hit her head after slipping in her bathroom this weekend, suffered a subdural hematoma and never regained consciousness.

I’m so shocked & saddened to learn my dear friend & colleague Ann B Davis died today.I spoke with her a few months ago & she was doing great

After originating the role of Alice for the original Brady Bunch series, which premiered in 1969 and ran for five seasons, Davis went on to reprise the character in the many offshoots, including The Brady Bunch Variety Hour, The Brady Brides and The Bradys. She also put in a cameo as a truck driver in 1995’s The Brady Bunch Movie.

The comedienne’s pre-Brady TV resume includes The Bob Cummings Show (for which she won a pair of Emmys for Supporting Comedy Actress), The John Forsythe Show and Love, American Style. As a member of the USO, she toured Vietnam, Thailand and Korea.

Davis’ most recent TV appearances include a 1997 episode of the Mel Harris/Jere Burns NBC sitcom Something So Right, a series of Swiffer commercials starring famous TV housekeepers and a “visit” this past February to The Talk, for the occasion of Florence “Mrs. Brady” Henderson’s birthday (watch it below).

And here, Davis’ Alice “works her wiles” to secure a petition signature: