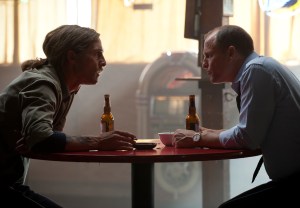 If time is flat circle, HBO’s True Detective is offering a little somethin’ extra this go-around.

The second season’s characters, setting and story are all new; Pizzolatto says that casting soon will begin in earnest.

On a related note, although Zero Dark Thirty star Jessica Chastain reportedly was approached about playing a role in the new season, she has since said she won’t take part in the project.

“I love Woody Harrelson, and I’m gonna watch the second season just like I watched every episode of the first,” the actress tells The Washington Post. “But I won’t be on it.”

Pizzolatto also tells the PRI podcast that Season 2 will take place in California — though not Los Angeles — and will try to evoke “a certain psychosphere ambiance of the place” like it did in bayou country in the first season.