I believe the word you’re looking for is “WHAT?!” After putting Mystic Falls’ finest through hell for a solid hour, Thursday’s Vampire Diaries delivered a game-changing ending that pretty much ripped our collective heart right out of its chest.

Well, not our heart so much as Stefan‘s.

In a moment no TVD fan could have ever seen coming, a pissed-off Julian — still inconveniently in Tyler’s body — ripped his heart right out, leaving Caroline to weep over his grey-ing corpse in the middle of an empty street. (And just when she and Stefan were starting to make some progress!)

And while we can all postulate that Stefan’s not actually gone forever — I don’t think the word “death” even exists in The Vampire Diaries‘ dictionary any more — the stage is certainly set for a hell of a finale next Thursday.

Now let’s go back a bit and see how we arrived at this devastating conclusion, shall we?

ON THE ROAD AGAIN | Prior to the big heart snatch, Stefan and Elena found themselves hunting squirrels — but, regrettably, not unicorns — along a dusty trail in the middle of nowhere. They hitched a ride with Julian’s wife, only to be assaulted by Luke and Liv (can they just die already?!) upon their return to Mystic Falls. Unfortunately for the Blunder Twins, the Travelers began their epic chant before they had a chance to kill one of the doppelgangers.

THE BACK-UP PLAN | Damon kidnapped what he thought was Markos’ entire stable of Traveler bodies, but was disappointed to learn they’re only a “small” portion of his massive army of chanting weirdos. Fortunately, Damon’s always got a Plan B. Cue “Tyler,” who was more than happy to take a bite out of Markos… until the Travelers’ spell took the fangs right out of his mouth. (So close!) As devastating as it was watching the gang relive their deaths — drowning, gunshots, etc. — as the Travelers’ chant undid the magic in Mystic Falls, I have to say, it was a pretty cool way to bring everything full circle.

TRUTH HURTS | Bonnie didn’t make too much progress this week — save for welcoming Stefan over to the Other Side, which was admittedly pretty huge — but she did come clean to Caroline about making up the spell to save her from disappearing. This was especially bad news for Enzo, who was counting on that spell to bring him back as well. (Frankly, I’m not ready to watch him die… again.)

A DASH OF DELENA | Elena’s reunion with Damon came complete with a huge kiss, as pretty much everyone has been urging the two of them to shut up and reconnect. Not only did former Stelena shipper Caroline urge Damon to get over himself, but even Stefan told Elena, “You two are miserable without each other. So if you want to be with him, just be with him.”

Browse shots from tonight’s episode below, then drop a comment with your reaction to the Stefan’s, shall we say, predicament. What could possibly happen next week?! 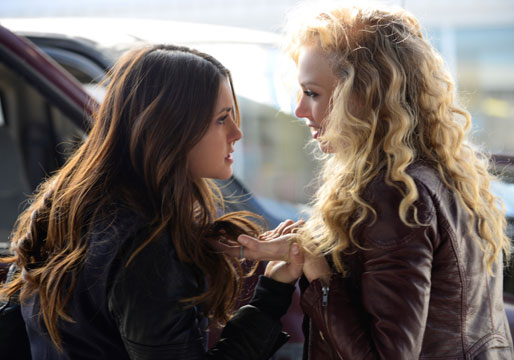