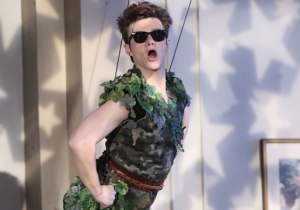 A blonde Santana? A solo-less Blaine? Glee truly went to the dogs this week — in more ways than one — as the gleeks attempted, once again, to figure out their next steps in life.

YOU CAN FLY! YOU CAN DIE! | A chance encounter with legendary Broadway flop Maggie Banks (special guest-star June Squibb) lead Kurt to a retirement home production of Peter Pan, and a chance death (RIP, Debbie!) landed him the title role. Things took a touching turn when Kurt attempted reconnected Maggie with her daughter, a super-busy lawyer who still harbors a boat load of resentment for her mom, who always put her career before her family. Fortunately, in true Glee fashion, everything turned out all right in the end.

PUBLIC RELATIONS | Desperate to salvage her reputation in the theater community, Rachel — with help from budding publicist Santana — launched Broadway Bitches, an organization dedicated to… something with dogs. I’m kind of fuzzy with the details, as was Rachel. She eventually came to her senses, though, allowing Kurt’s retirement performers to sing at her big adoption event.

TRAINING DAY | Sam, meanwhile, found himself in the doghouse when he surprised Mercedes with a tiny terror named McConaughey. (It’s all fun and games until someone’s weave gets chewed up!) Through the magic of musical montages, Sam and Artie managed to whip the pooch into shape, but that didn’t immediately squash Samcedes’ issues. In fact, little McConaughey ended up being re-adopted by a nice elderly couple, much to Sam’s dismay.

What was your favorite song from this week’s Glee? Cast your vote below, then drop a comment with your review of the Chris Colfer-penned episode.