With all this Traveler/Other Side drama going on, Elena and her pals treated themselves to a nice, relaxing getaway in Thursday’s Vampire Diaries. … Wait, did I say relaxing? Scratch that. It was pretty much the weekend from hell.

Taking advantage of the thinning between worlds, Enzo executed his revenge plan on Stefan and Damon, trapping the brothers in a burning woodshed. Fortunately, he underestimated the resolve of Team Salvatore, so not only did the brothers escape, but there’s no bad blood between them. (OK, fine, it also took a right-hook to Stefan’s jaw, but he and Damon are officially on good terms… for now.)

But the gang’s not out of the woods — literally, metaphorically, etc. — just yet! The episode’s final moments found Elena being swarmed, and kidnapped, by Markos and his nasty band of chanting goons. I do believe it’s officially time to panic.

CAROLINE’S THIRST IS REAL | We’ve always known that Caroline thinks Stefan/Elena are endgame, but this week — for the first time — she actually said “Team Stelena” out loud. Her ship-fest continued during the world’s most awkward game of Never Have I Ever, in which she attempted to get Elena to admit she’s been hooking up with her ex… which she hasn’t. “Where did that even come from?” Elena eventually asked during a walk in the woods, to which Caroline responded honestly, “I have no idea.” (Of course, we all know where it actually came from: her intense Steroline-fueled paranoia.) Stefan and Caroline shared a cute scene at the end of the episode (“I don’t want you to think any less of me,” he told her) which proved, beyond the shadow of a doubt, that she wants it. She wants it bad. KISS ME, YOU FOOL | Of course, Caroline doesn’t really have to worry about Elena snatching Stefan away from her, because she’s still all about Damon. After apologizing for lying about Enzo, she and her ex had one of their classic “What the heck is going on with us?” chats, which ended with Damon planting a big ol’ kiss right on her mouth. I don’t think this constitutes a full-blown rekindling of the Delena flame, but it’s definitely a spark in the right direction. (Side note: Remember when Damon and Elena kissing was actually a big deal? That ship, pun intended, has sailed.)

SWEET TORTURE, BRO | In an attempt to learn more about the Travelers’ plans, Matt and Jeremy chained “Tyler” up and force-fed him vervain water. Honestly, there was a lot of Tyler torturing this week — in various states of undress, I might add. (Raise your hand if you disapproved. Oh, no one? Cool.) Bonnie and Jeremy were eventually led to the secret location of the Travelers’ real bodies, but the welcome wagon showed up to snatch Julian’s body first. I believe Jeremy said it best: “Worst date ever.” (Meanwhile, Bonnie is maintaining her residency on the Isle of Denial, at least as far as Jeremy is concerned. When will she tell him she’s going bye-bye forever?!)

Did you enjoy this week’s trip back to the woods? Are you as blatantly thirsty for Stefan as Caroline is? Browse pics from this week’s episode below, then drop a comment with your take. 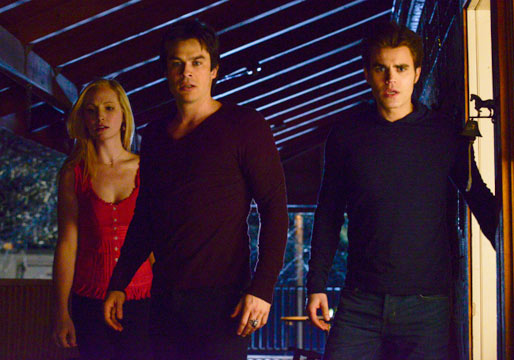