Kids say the darndest things, as the old expression goes, but so do contestants and coaches on Season 6 of The Voice.

Tonight’s Top 10 results telecast found Bria Kelly declaring her desire to subsist solely on a variety of cheeses, Usher confessing that he likes to cook in his underwear (as if we didn’t already suspect from his torso an aversion to deep-fried foods) and Shakira, in her infinite blurt-iness, sharing this gem: “I can wiggle all the things, but not my ears.”

Fret not: I won’t quit my day job to become a lyricist. But we’re not here to talk about Shakira’s musical fortunes, anyway. Rather, let’s discuss the fate of the 10 singers attempting to follow in the footsteps of Jermaine Paul — right up to (and not seven seconds beyond) the season finale.

Here’s how the Top 10 results played out:

Last Chance Performances
Bria Kelly: Heart’s “Crazy on You” — Grade: C | Doctor, is it possible to be allergic to a person’s vocal tone? Bria went crazy, crazy on the affected growlization, and it was no bueno.

Tess Boyer: Pink’s “Who Knew?” — Grade: B | Yeah, I heard some nerves creep in on the verses, but her lower register remains delectable, and those big notes at the end were purdy. Still, Tess left the window open, and climbing right on through came…

Kat Perkins: Grace Potter and the Nocturnals’ “Paris (Ooh La La)” — Grade: A- | Kat was the only member of this week’s Bottom 3 who didn’t let a hint of abject terror inform her performance. The vocal was ferocious, the stage presence was rock-star authentic, and my allegiance to Tess got rocked in the process, resulting in the following series of ridiculous tweets…

With about a minute left on the clock, Carson Daly killed the suspense and revealed Kat had amassed 58% of the vote (compared to 22% for Tess and 20% for Bria). Hrmmm…wonder how that was gonna turn out?

Before the Twitter polls closed, Adam promised that if Kat was saved, he would reverse the typical Voice trend of the “Saved” contestant getting ousted the following week. I almost believe he can make it happen.

What did you think of the Top 10 week results? Did the right contestant get saved? Sound off in the comments! And for all my reality TV-related news, interviews and recaps, follow me on Twitter @MichaelSlezakTV!
Follow @MichaelSlezakTV
https://www.youtube.com/watch?v=gK7RXsIutlk

The Voice: Advice and Dream Set Lists for the Season 6 Top 10 Contestants

If you like TVLine, you'll LOVE our email news alerts! Click here to subscribe.
The Voice Top 10 Results Recap: Did the Right Contestants Get Cut This Week? 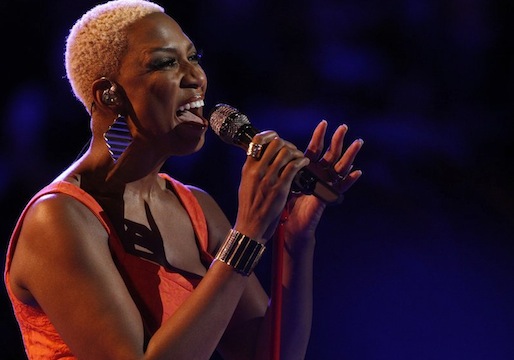