What’s not to like about The Voice? The sleek cruise liner of reality-competition shows is filled with friendly folks, operates beneath limitless blues skies and generally leaves you feeling relaxed, giddy, maybe even mildly inebriated. Heck, it does everything short of dropping you on the dock at Puerto Vallarta.

Can I just file one little complaint, though? In the Venn Diagram of popular music from the last 50 years that’s been performed on The Voice, American Idol and The X Factor (R.I.M.T.*), shouldn’t the buzziest, Emmy-winningest of the three series be reinvesting some of its profits to expand its songbook, rather than dragging its contestants to the dry creekbed of “Don’t Let the Sun Go Down on Me,” “Waiting on the World to Change” and “Rolling in the Deep”? (*rest in mild turmoil)

OK, yeah, we got some Sam Smith — done transcendently — plus an atypically un-terrible Katy Perry song and a taste of the legendary Juice Newton (if you don’t know her, click here and thank me down in the comments). But when you’ve got a Top 12 with this much vocal firepower and consistency, shouldn’t Mark Burnett & Co. be delivering two straight hours of “!!!!!!!!!!!!” without the slightest hint of “zzzzzzzz”?

There, just one little complaint. Oh, and wait, one more thing: Please, for the love of all that’s holy, buy some new mics. Twenty-two seconds of audio silence during poor Kristen Merlin’s performance wasn’t much fun for anyone!

On that note, let’s get to my letter grades for tonight’s performances:

Bria Kelly: “Rolling in the Deep” — Grade: C- | Sigh. Those crackling flames on the backdrop tonight (oh, Usher, just because the first three words of a song are, “there’s a fire…”) served as a sad metaphor for the tragic inferno of Bria’s once lofty Voice dreams. The staging, with Bria trying to navigate her way down a flight of stairs with her unplayed guitar swung impotently over her shoulder, was a mess, but even worse, her vocal was below par, too. The entire second verse, which was pitched too low to reach the best parts of Bria’s tone, shivered like a toy poodle in a cold bath, and the final refrain was ragged and inconsistent. “You’re definitely a candidate for being able to knock that one out,” Adam muttered, deliberately failing to say that Bria had actually succeeded in the task. And in terms of Voice critique, that’s practically Statler and Waldorf-esque!

Delvin Choice: “Unchained Melody” — Grade: C+ | “Sing like you’re dying!” demanded Adam, in a dubious bit of rehearsal advice. Then again, maybe that approach would’ve been better than Delvin’s, which seemed built around the concept that the longer yoooooou hoooooooooooooold your noooooooooootes, the better. Yeah, I know, “Unchained Melody” is that kinda song, but Delvin took it to extremes, tossing in trills and flourishes that only highlighted his total lack of connection to the lyrics. The end result, while mostly in tune, packed all the punch and passion of Siri looking up the title of that Julia Louis-Dreyfus/James Gandolfini movie that came out last year. (It’s Enough Said, BTW, and it’s terrific.)

Dani Moz: “Just Give Me a Reason” — Grade: B | The talky intimacy of Dani’s opening verse made me feel like I was accidentally eavesdropping on a personal conversation — and I say that in the best possible way. The woman definitely takes her time with a lyric, and doles out her words in a way that allows your brain fully digest and appreciate ’em. That said, on second listen, I heard more than a couple of iffy notes in the chorus, and I also couldn’t help but agree with Adam’spoint that the latter half of the performance needed more rise and fall. Thus, the downgrade from B+ to B.

Audra McLaughlin: “Angel of the Morning” — Grade: B- | Like I said before, I’m a big Juice Newton fan, but even with that leg up, I could only make out maybe a third of Audra’s lyrics in the opening verse of “Angel of the Morning.” Girlfriend’s pained expression and garbled diction had me wondering if, perhaps, she objected to telling the tale of “the other woman” imploring her married lover for one more touch before his exit. Or if maybe she was struggling to remember her lyrics. Don’t get me wrong, there were pretty moments in the mix, too (just not that bizarre-o black dress with the cutouts and the structural integrity issues), but a week from now, my most vivid memory of this number might be Usher saying he’d have to pee if he ever held a note as long as Audra’s.

T.J. Wilkins: “Waiting on the World to Change” — Grade: B- | There was something slightly retro in T.J.’s arrangement of John Mayer’s ode to twentysomething political apathy (which he embarrassingly and grinningly misinterpreted as an anthem of social change). That throwback vibe (and T.J.’s stilted body language) undercut Usher’s edict that his team go “current” for Top 12 night, but on the bright side, at least T.J. showcased near-perfect pitch (if not the world’s most unique tone). Here’s hoping that if the guy survives, Usher finds better advice for working the stage than “clap and point,” yes?

Christina Grimmie: “Dark Horse” — Grade: A- | “Ohhh, so this is what a Katy Perry jam sounds like when it’s sung live and in tune,” said half of America while listening to Christina’s personal best perfomance to date. The opening verses had a great, conversational quality about them, and by the time Christina reached that earworm chorus, it was as if her voice had blown-up — Hulk-style — into something bigger, badder and more ferocious. I believed the dark energy of her warnings, maybe even feared ’em for a second. Yeah, OK, the girl still tends to pull the trigger three or four times where one good glory note would do the track, but this is the first time I was able to envision a Grimmie win without feeling all grim about it. (Uff, that last sentence was brought to you by the words “Painfully” and “Obvious.” My apologies.)

Sisaundra Lewis: “Don’t Let the Sun Go Down on Me” — Grade: B+ | Look, the fact of the matter is, it wouldn’t be a shock if Sisaundra someday winds up playing Vegas stages down the block from her former employer Celine Dion. Someday. But for the love of all that’s in your Starbuck’s cup, Blake, let’s not sentence the Season 6 Vocal BeastMaster (™ pending) to a stint in cocktail-lounge prison, OK? Oh sure, Sisaundra didn’t miss a single note. She dug into the emotional core of the song like a giant excavator into a sandbox. And she showed sly, expertly crafted restraint in the process. But Sisaundra is not gonna take home the crown without rocking out, going uptempo and/or choosing current tunes, too. In other words, the more perfect a singer is, the more unexpected and audacious — and perhaps even dangerous — she’s got to be. Is it insane that I want a Sisaundra cover of “Welcome to the Jungle” on the Voice stage/in my iTunes library next week? And is it insane for me to scan backwards to confirm I actually just typed that sentence for the entire Internet to see? Wait: Don’t answer me!

Kristen Merlin: Sugarland’s “Stay” — Grade: B | Argh. I mean, ARGH. Kristen was two-thirds of the way done with her pretty, butterfly-delicate, slightly imperfect rendition of this other-woman anthem (the second of the night after Audra’s!) when her mic went dead — and all the at-home audience could hear was the background music. The judges gave her a big standing O — and a guy on the crew gave her a new mic with which she managed to get out the last three seconds of the ditty, but still, ARGH. Hopefully, that’ll have inspired enough audience voting to keep her safe another week. I mean, Mark Burnett would be required by the Reality TV Supreme Court (fun fact: Coryn from Top Model is one of the seven justices!) to give the woman a one-week repreieve if she actually turns out to be the lowest vote-getter, right?

Kat Perkins: “Magic Man” — Grade: A- | By no means was this the most original, inventive performance in Voice history; after all, Kat was pretty much coloring directly within the template of Ann Wilson’s masterpiece. But in this particular instance, I still couldn’t help but be wowed by Kat’s technical prowess in the face of such high difficulty, the way her voice rose higher and higher, piercing through the auditorium and over the tricky cadences, without ever going the slightest bit out of tune. Next week, we’ll demand she detonate the concept of karaoke. Today, we’ll just offer a slow clap: Kat! Kat! Kat! Kat! Kat!

Jake Worthington: “Anymore” — Grade: C | Shakira correctly labeled Jake as The Voice‘s “most endearing contestant” — I mean, after all, the kid welled up with tears at the sight of his “mama” out in the audience. But all the charm and aw-shucks-ness in the world doesn’t mean Blake should’ve attempted a lie as bald-faced as “the pitch was perfect.” (Ummm, Shelton, do you know the meaning — and the context — of the word “pitch”? Sheesh.) Seriously, Jake’s entire opening verse was flat and gaspy, his notes got clipped shorter than an infant’s fingernails and you could see on Jake’s face that he knew it, too. By virtue of his likability alone, you know Jake won’t get booted come Tuesday night, but I’m not sure that doesn’t mean he shouldn’t.

Tess Boyer: “I’ll Be There for You” — Grade: B+ | Passionate. Powerful. Ninety percent on-point in the intonation department. Unfortunately, though, the new arrangement Shakira was pushing during rehearsals didn’t wind up straying very far from Bon Jovi’s original template, leaving Tess a little more vulnerable than she ought to be. I mean, it’s hard to win a reality singing competition in 2014 when you’re stuck in a prison made of vintage Aqua-Net bottles, circa 1989. (I gotta admit, though, I do love that sitar-esuqe guitar intro — best part of the song, in my humble opinion.)

Josh Kaufman: Sam Smith’s “Stay With Me” — Grade: A+ | Sure, Josh got the night’s best backdrop (even if the electronic raindrops would’ve been more apt for his Playoffs round rendition of “It Will Rain”). And yes, he had the special lighting and carefully placed background singers and the added bonus of closing the show. But guess what? He earned it — all of it — by serving up a slice of sheer vocal perfection. Josh alternately ached and seduced, belted and whispered, hit notes of the growly and falsetto varieties — while capturing the reluctant insecurities of a man in one-night stand mode. Could this displace Amanda Brown’s “Dream On” as The Voice‘s all-time best moment? I’m not really sure. But the fact that I’d even consider the thought out loud, well, that speaks volumes. Josh would really have to faceplant after this triumph to fall short of Top 4 (or even Top 3) status.

What did you think of the Top 12? Who were your faves? Who’s in trouble? Take our poll below, then sound off in the comments! And for all my reality TV-related news, interviews and recaps, follow me on Twitter @MichaelSlezakTV!

The Voice Season 6 Top 12 Rankings: Who Has Momentum Heading Into the Live Shows? 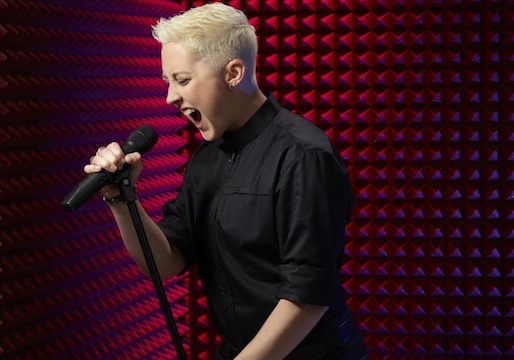