Battle lines are being drawn in Orphan Black Season 2, premiering April 19 at 9/8c on BBC America, and a new batch of character posters reveals who’s teaming (and hooking) up with whom.

Let’s break the interactions down, shall we?

* Despite her attraction to newcomer Cal (Game of Thrones‘ Michiel Huisman), Sarah is clearly wary of him — as she should be, considering her history with good-looking (straight) guys.

* Much like Sarah’s situation with Cal, Cosima is unwilling to (literally) let go of her relationship with Delphine, no matter how much trouble she may cause.

* Felix and Alison appear chummier than ever, much to the chagrin of Alison’s husband Donnie.

* And then there are the bad guys. It seems like Paul is officially in league with Rachel and Dr. Leekie, though his sideways stance suggests he might not be fully committed to their plan.

Worried about who might be joining Helena and Katja in clone heaven? Browse the new posters below, then drop a comment with your thoughts on Season 2.

If you like TVLine, you'll LOVE our email news alerts! Click here to subscribe.
Orphan Black Season 2 Posters Hint at Shifting Alliances and a New Romance 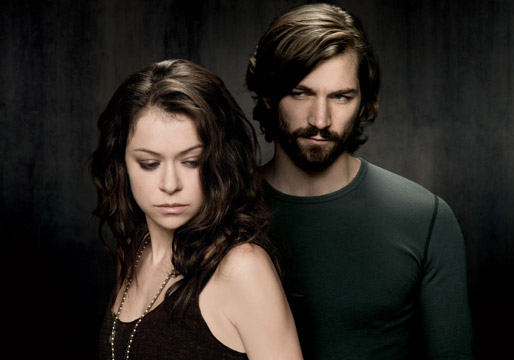