We’re exactly one week away from the return of The CW’s The Originals (April 15, 8/7c) — and just when you thought the stakes couldn’t get any higher in the Big Easy, enter “the original werewolves.”

TVLine spoke with Nathan Parsons (aka Hayley’s were-fiancé Jackson) about what we can expect from those new wolves, Jackson’s blossoming relationship with Hayley and the rest of Season 1.

TVLINE | Even in its first season, The Originals is pretty complicated. How familiar were you with it when you joined?
I was familiar with the general mythology from The Vampire Diaries, because I’d met Julie [Plec] and a few of the executive producers when I read for a few parts. Actually, I read for one of the vampires back when The Originals was casting as a pilot. I kept myself up to date on the mythology, so when they called again for the part of Jackson, it wasn’t tough to catch up.

TVLINE | You were almost a vampire? Do you remember which one you read for?
I don’t, unfortunately. They actually don’t tell you the names when you go in. It’s all very secretive.

TVLINE | Let’s talk Hayley and Jackson. What’s really going on there?
Their relationship is complicated. Jackson has watched Hayley as a wolf for years, so he’s had a lot of time to get to know her. When the curse was broken and he finally got to talk to her in person, he’d built up an entire relationship in his head. So for him to just say, “Hey, I’m that wolf that’s been watching you and we’re supposed to be married,” that was a lot to throw at her at once. I think she was a little taken aback. Also, the reality is starting to set in for Jackson: Hayley is pregnant with Klaus’ child. Nothing ever goes the way you plan it. TVLINE | Jackson seems to care about Hayley, but he also needs her for political reasons. How will he balance his emotions with his politics?
There’s a way, I think, to achieve both. You want the pack to be strong and you want Hayley to be the queen, but she also has a relationship with the vampires. I think Jackson will use that relationship to get back into the good graces of the original vampires. It’s a tough line to walk; you want the personal relationship, but you also need the political relationship.

TVLINE | Should we expect tension between Jackson and Elijah, Hayley’s two men?
I think so. Generally, vampires don’t like werewolves, and werewolves hate vampires. Every time I see one, I want to kill them. But Elijah’s relationship with Hayley does make things complicated. Plus, [the originals are] the ones in power. I don’t think the original vampires are as bad as Marcel was — Elijah seems like a much smarter leader — so maybe this is a relationship we can deal with, once we’ve gotten over that gut instinct.

TVLINE | We’ll also be meeting some of Klaus’ werewolf relatives soon. Will they get along with Jackson’s pack?
Well, we’re all wolves at the end of the day. I’m not sure how their interaction is going to go down, though. We’re starting to learn more about this Crescent pack, but we haven’t really examined the greater werewolf culture yet. We haven’t seen how they interact with the other packs, and I’m curious to see how that develops.

TVLINE | Did you ever think you’d be discussing “the greater werewolf culture” in your career?
[Laughs] You know, I can’t say that ever came up in acting class.

TVLINE | Generally speaking, where is the season headed as we approach the finale next month?
Well, we’ve met the original vampires, now we’re going to start to learn about the original werewolves and we also have some really old original witches on the show now. Basically, everyone is going to butt heads. They all want peace, but they all want it on their own terms. We’re starting to see all of it spiral out of control, as much as Klaus and Elijah are trying to keep it together. Their world is being ripped apart. I can’t wait for the season finale because, the way things are boiling up now, I know it’s going to be explosive.

Any thoughts on Hayley and Jackson’s relationship? Browse pics from the April 15 episode below, then drop a comment.

If you like TVLine, you'll LOVE our email news alerts! Click here to subscribe.
The Originals' Nathan Parsons on Hayley's Future With Jackson, the 'Explosive' Finale and More 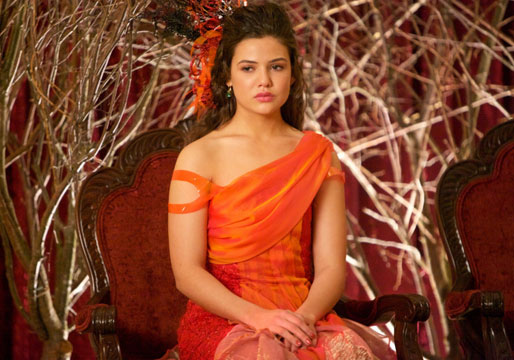