Fox’s Raising Hope wrapped up its fourth and final season Friday night with a manhunt, a wedding and a surprising number of near-death experiences.

RELATED | Raising Hope Cancelled, to End Its Run in April

The first part of the finale felt like a fairly standard episode of Hope, with Burt realizing his dream of becoming an amateur bounty hunter, while Jimmy and Sabrina discovered that having a maid isn’t all it’s cracked up to be. (Bonus points for casting Downton Abbey‘s Lesley Nicol as the maid, and for Maw Maw’s off-kilter interpretation of Downton‘s Dowager Countess.)

In the second half of the hour, Virginia’s estranged father Arnold returned with big news: He was engaged and willing to pay for Hope’s college education if Virginia agreed to plan the wedding for him. The catch? She only had three days to make it all happen.

Virginia revealed she’d been planning her own dream wedding since she was a little girl, so she already had an entire book of ideas — which was pretty convenient, because the wedding actually ended up being for her and Burt. Everything was perfect, from Virginia’s Princess Diana wedding dress (replica) to a surprise appearance by none other than Kenny Loggins.

I’ll admit, I got a little choked up during Burt and Virginia’s first dance when Loggins played “Danny’s Song,” the same tune Virginia used to get Hope to sleep when the show began. Jimmy’s final voiceover, about how it doesn’t matter when you decide to start being a parent, was also a nice way to close the series.

What did you think of Hope‘s series finale? Cast your vote below, browse pics from the final hour, then drop a comment with your review.

If you like TVLine, you'll LOVE our email news alerts! Click here to subscribe.
Raising Hope Series Finale Recap: The Chance Family Says Goodbye -- and 'I Do' 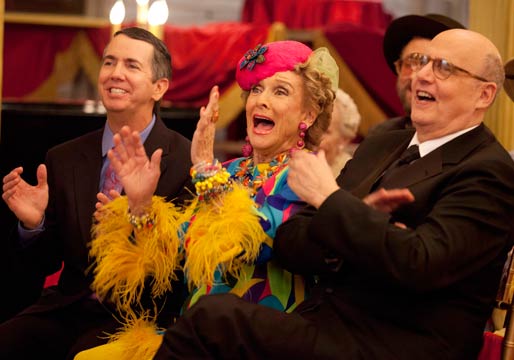