Below, Hasson previews what we can expect from the game-changing hour, including whether or not long-suffering Janny fans will finally get their reward.

TVLINE | We recently posted a clip of Charlie going bananas. Will we see him go crazier during the finale?
Oh, you’ll see Charlie at his craziest, for sure. Jack Falahee, the actor who plays Charlie, is very good. And he’s fairly new to film, so that’s incredible.

TVLINE | What else can we expect from Charlie? Will we learn anything new about him?
We find out some major things about Charlie and his past. Jo is becoming more and more creeped out by him, and she’s really starting to see through his lies as she discovers more about him throughout the episode. They also spend a lot of one-on-one time together, much to Jo’s dismay.

TVLINE | Any one-on-one moments for Jo and Danny?
Yes, there are a couple of really nice moments between Danny and Jo where they get to say their real feelings. TVLINE | And those feelings are…?
[Laughs] I think the episode ends with a lot of possibility. They’re so busy with all the murder, lying and deceit, so it’s very hard to concentrate on their love lives. But it definitely ends with a moment of possibility.

TVLINE | I imagine fans have had quite a bit to say about Janny on Twitter.
Oh, absolutely. I guess there’s Dacey and Janny, and also Jico, which is Jo and Rico. And now there’s Lacey and Whitney. There are so many couples. Everybody’s dating each other, I can’t keep track.

TVLINE | The final also reveals a big secret about Whitney. What’s Jo’s reaction to that news, and what was yours?
I think Jo’s pretty indifferent to Whitney; they have, I think, one scene where they actually speak to each other. But I was very surprised about the reveal about Whitney and her father, Jack.

TVLINE | I know it’ll end on a cliffhanger, but how much resolution will there be?
There’s no resolution. Are you kidding me? What do you think you’re watching?

TVLINE | Of course, how silly of me. Can you say who’s involved in the cliffhanger?
Charlie, Jo’s parents, Danny, Danny’s family, Lacey … pretty much everyone. It’s a very mixed-up and messy cliffhanger. It’s nice to have everybody in one room, as actors, because we all get along so well. It’s a little harder to work sometimes, though, because we’re always laughing really hard. I remember when we shot the finale scene, they played a song that would be kind of the ambience to the end credits while we were rolling. I couldn’t take it seriously, even though it was so intense.

Browse pics from the Twisted finale below, then drop a comment: How do you think it will end?

If you like TVLine, you'll LOVE our email news alerts! Click here to subscribe.
Twisted's Maddie Hasson Teases 'Messy' Finale Cliffhanger and a 'Possibility' for Jo and Danny 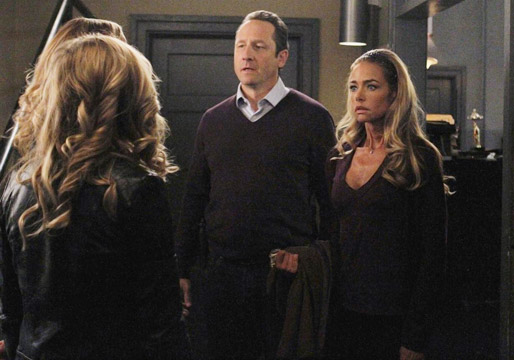