Major spoiler alert! If you have yet to watch Monday’s series finale of How I Met Your Mother, avert your eyes now. Everyone else, read on…

Ted’s journey came to a close on Monday as How I Met Your Mother finally unveiled how the bachelor met his children’s mama and (finally!) revealed her name. (It’s been nice getting to know you, Tracy Mosby.)

But that was just the tip of the iceberg. Hopping around in time between 2013 and 2030, the series finale offered an emotional and funny — but not particularly surprising — glimpse at the gang’s future. Let’s start at the beginning…

SEPTEMBER 2005 | Kicking things off with what could have been a scene from early Season 1, Lily inducts Robin into the gang. She wants to keep the gal a part of their lives forever, so she forbids Barney and Ted from banging her – unless they marry her.

MAY 2013 | Ted’s ready to go “onwards and upwards” when he spots the pretty bassist at Barney and Robin’s wedding. The newly married groom wants to play a game of “Have you met Ted?” with them, but Ted is about to leave. The gang makes its way outside to say goodbye, and Alyson Hannigan delivers what will be the first of her many impressive waterworks during the hour. (At least Ted’s strange, E.T. goodbye with Lily makes things easier to bear.) “It helped that that was really creepy,” she says. “I don’t want to see you for a while.” But a mere 24 hours later, she and Marshall run into Ted at MacLaren’s. That whole moving to Chicago thing? Forget it! He’s got a date with the cute bassist. Marshall’s worried about Ted falling in love and getting his heart broken again, but Lily can sense that this time is different. (By the way, Ted’s wounded hand at the train station? That came from the ultimate farewell high five with Barney.)

2015 | Ted and The Mother are planning their grand wedding when she reveals that getting hitched in September may prove problematic. You see, she wants to be able to fit into her dress… and the baby growing in her belly will soon make that impossible. Meanwhile, another couple isn’t doing quite as well. Robin’s travel-heavy work schedule has taken its toll on her marriage to Barney. While they’re in Argentina, she ends up offering him an exit at the three-year ramp; he takes it, recalling that he promised to always tell her the truth.

2016 | A preggers Lily and Marshall decide to move to a bigger place as the cockamouse makes one final appearance. Robin shows up at their Halloween/goodbye-apartment party, where Barney is back to his old ways and Ted is still wearing his hanging chad outfit. When Lily gets upset that the gang is falling apart, Robin points out that the gang is now a married couple she never sees, her ex-husband scamming on chicks, the guy she probably should have ended up with and the beautiful mother of his child. “We’ll always be friends. It’s just never going to be like how it was,” she adds.

2019 | At a robots-vs.-wrestlers match, Marshall asks Ted and The Mother if they’re ever going to get married or just continue living in sin — potentially opening the door for more Ted-and-Robin drama. Later, Barney shows up and reveals that his quest for the perfect month led to an unexpected surprise: No. 31 – “That’s a pretty name. Is that French?” The Mother asks – is pregnant! (How this didn’t happen sooner, I’ll never know.)

2020 | Barney welcomes a baby girl named Ellie, and while he’s hesitant at first, he quickly falls for her charms. “You are the love of my life. Everything I have and everything I am is yours. Forever,” he tells his newborn daughter. (Neil Patrick Harris in this scene = so good.) Meanwhile, Ted decides to finally make the mother of his children an honest woman. “Will you marry me” – she interrupts again with a chorus of “yeses” – “on Thursday?” he finishes. Guess who shows up for the big moment? At The Mother’s urging, it’s Robin — and the couple does actually get hitched. Phew! It only took seven years. But as Lily starts toasting Ted’s “emotional endurance” and Future Ted says, “If I hadn’t gone through hell to get there, the lesson might not have been as clear,” you know where this is going.

The lesson: to love as fiercely as he could and to love through all the highs and lows, which is what he does when The Mother got sick. And to be brave, or he wouldn’t have had the courage to stand up and talk to her at the train station, where they have a meet-cute about who the umbrella really belongs to. As it turns out, the initials on it could belong to either one of them because theirs are both T.M.

But wait, the kids cut in, this story isn’t about how Ted met their mother. She’s barely in it, they argue. This whole thing is really about how Ted’s in love with Aunt Robin, and he wants their OK to ask her out. Mom’s been gone six years, so Penny and Luke are totally cool with their father moving on. The final image: Ted shows up outside Robin’s apartment with the blue french horn. (Not sure how they’re going to make her job and a relationship work when she and Barney couldn’t do it sans kids, but there you have it.)

Whether you loved it or hated it or something in between, the fact that Lyndsy Fonseca and David Henri filmed that sequence years ago – and signed one heck of a non-disclosure agreement – does prove that Ted and Robin have been in the cards since the beginning. But does that sort of make the titular Mother an afterthought? Or do you feel like their love story was deep and real, too?

Grade the series ender via the poll below, then hit the comments to back up your pick! 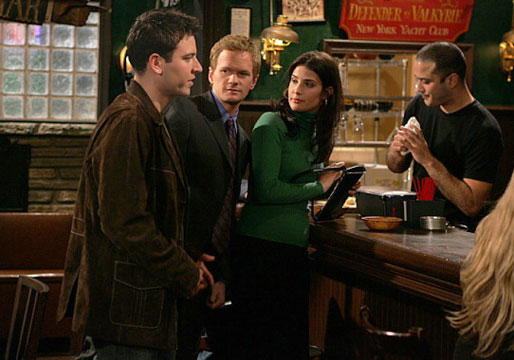