Six friends. Three relationships. One extremely awkward sexual encounter. Is CBS’ Friends With Better Lives, which premiered Monday at 9/8c, exactly what you need to fill that How I Met Your Mother-shaped hole in your heart?

Let’s break FWBL down character-by-character, starting with Will (James Van Der Beek). The handsome doctor denied that his marriage was over until the end of the episode, when his soon-to-be ex-wife physically handed him the divorce papers. And we’ve got to ask: Is she crazy? We spent the entire half-hour scanning Will for even a single flaw and came up empty.

The new bachelor is now crashing with Bobby (Kevin Connolly) and Andi (Majandra Delfino), who fear their own marriage is stuck in a rut when they both forget their anniversary. And as they learned in the premiere, spontaneous oral sex is not a quick fix for wedded bliss, especially when you have an audience of… everyone you know.

Rounding out the show’s sextet is Jules (Brooklyn Decker), a gorgeous blonde who spontaneously gets engaged to her perfect-yet-eccentric new boyfriend Lowell (Rick Donald), and Kate (Zoe Lister-Jones), the grumpy cynic who will likely remain single until pigs fly over a frozen hell.

In my opinion, Kate is also the show’s weak link, as she’s essentially the human embodiment of a Cathy comic strip. Everything that came out of her mouth in the premiere was grumpy and negative, which didn’t gel with the show’s generally upbeat vibe. Frankly, I would have cut her out of my life a long time ago.

Despite its flaws, though, FWBL has all the makings of a successful CBS sitcom. And there’s no question why it premiered immediately following the How I Met Your Mother finale, though I have to wonder how many long-time HIMYM fans are too distraught to even consider adding a new romantic sitcom to their DVRs.

What’s your take on Friends With Better Lives? Cast your vote below, see pics from the premiere, then drop a comment with your review.

If you like TVLine, you'll LOVE our email news alerts! Click here to subscribe.
Friends With Better Lives: Are You Ready to Commit to CBS' New Sitcom? 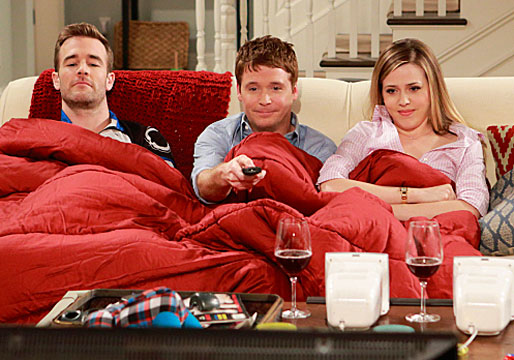