Elena finally snapped out of her Katherine-induced bender in this week’s Vampire Diaries — and she had a hell of a hangover to nurse.

Between her mind-bending hallucinations, intense bouts of paranoia and occasional impulses to stab curly blonde witches (I actually didn’t mind that part so much), Elena spent Spring Break pretty much falling apart at the seams. She was also convinced she had killed Aaron and was surprisingly bent out of shape about it. (Did I miss something? Were they really that close?)

When Damon eventually buckled down and told Elena the truth about who killed Aaron, he gave her a big dramatic speech about how he only murked him to prove to Elena that he could be bad — which only further showed how ridiculous his latest downward spiral really was. It’s like Damon only has two potential statuses: “In a relationship” and “Single, bloodthirsty monster.”

This led to a massive fight, in which Damon and Elena decided — for the millionth time — that they’re no good for one another. And then, also for the millionth time, they threw caution and logic to the wind and tore each other’s clothes off. It’s frustrating that these two still can’t get their feelings in order after five seasons, but at least they’ll give us a heck of a show while they sort it all out.

STEFAN 3.0 | It turns out Enzo and his Traveler buddies had the antidote for Elena’s super-virus all along, but like most things in the supernatural world, there was a big fat catch involved: Before handing it over, they needed Stefan to help them track down his other doppelganger — that’s right, there’s another one! — as part of their master plan. A locator spell revealed the new doppelganger to be an EMT in Atlanta (convenient!) and now Caroline has the joyous task of having to, uh, ‘take care’ of him. Why do I have a sneaking suspicion that this won’t go as planned? ELENA’S ‘NEW’ FRIEND | During one of her hazy spells, Elena met a handsome young chap named Luke… or at least she thought she was meeting him. He had apparently gotten to know her pretty well during her Katherine days, but there’s one thing she doesn’t know about him: He’s Liv’s brother — and he and his sister are up to no good! I knew I didn’t like Liv for some reason; after five seasons, I should really learn to trust my gut.

CAROLINE’S ‘THING FOR ACCENTS’ | Question for the group: How do we feel about Caroline and Enzo? Because I’m pretty sure, despite all my personal objections, this show is going to do everything it can to push them together. After all Caroline has been through lately, I’m hoping she opts to pump the breaks on her love life altogether. That girl needs a break.

Browse pics from tonight’s episode below, then drop a comment: Were you surprised by the Luke/Liv twist? What’s to become of Stefan’s new doppelganger? And where do you stand on the potential issue of ‘Carolenzo’? 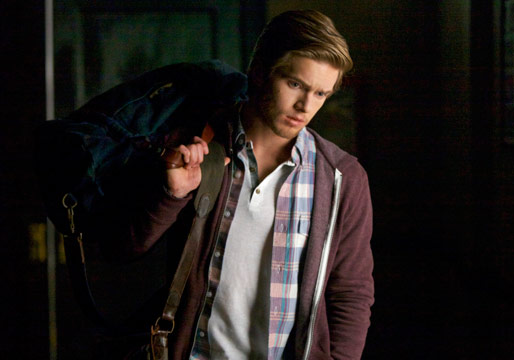