How best to trumpet the return of a series about Leonardo da Vinci and starring attractive people than with said cast members wearing nothing but the famous artist’s work?

As the Starz drama Da Vinci’s Demons ramps up for its Season 2 premiere, airing this Saturday at 9/8c, TVLine has gotten its mitts on a series of portraits, in which Da Vinci sketches are projected onto the bodies of stars Tom Riley (who plays da Vinci), Blake Ritson (aka the ruthless Count Girolamo Riario) and — gender equality! —  Laura Haddock (Lucrezia Donati).

As the drama’s sophomore run unspools, with Florence thrown into chaos in the wake of the Pazzi conspiracy, Leonardo da Vinci will push the limits of his mind and body to defend the city against the forces of Rome. He will also continue his quest to find the fabled Book of Leaves and uncover the secret history of his mother — only to realize that he has lethal competition in his quest, new enemies who may be even worse than the forces of Pope Sixtus.

But enough of words. Here, pictures. (I think we may have solved why the Mona Lisa is smiling.) 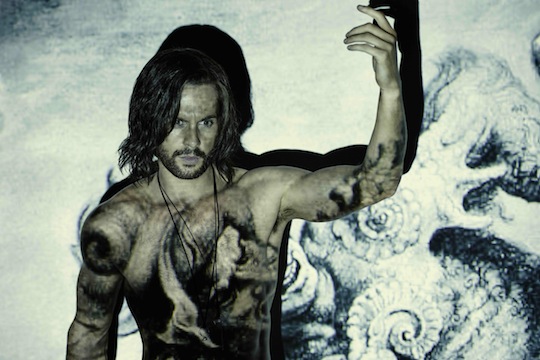