Glee promised a cavalcade of returning favorites for its upcoming 100th episode (March 18, 8/7c on Fox), and based on the following sneak-peek photos, there’ll be no raining on long-time fans’ parades.

From the looks of it, the Champagne will pop, the (erstwhile) Cheerios will dance, Brittana will reconnect, and Rachel, Kurt and Mercedes will sing. Plus, somebody winds up in a Dumpster.

RELATED | Glee Recap: It Takes Two to Make a Thing Go Right; It Takes Three to Make It Out of Sight

Perhaps most important of all, though, we see images of two characters paying tribute to the No. 5 jersey of New Directions’ late leader Finn Hudson. We’re not sure exactly how the scene will play out, but we’re guessing you’ll want to have a box of tissues handy.

Click through the pics below, then hit the comments and sound off on your anticipation level for Glee‘s 100th spectacular.

If you like TVLine, you'll LOVE our email news alerts! Click here to subscribe.
Glee 100th Episode First Look: Puck, Quinn, Mike and April Return! Plus: A Tribute to Finn 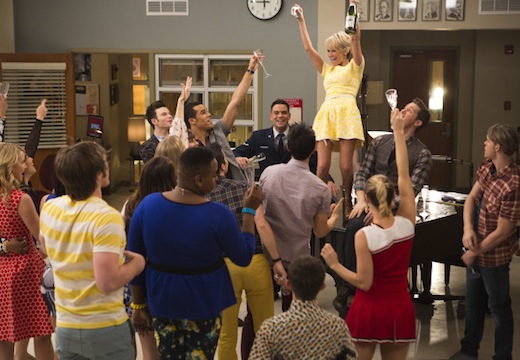