Pretty Little Liars is bringing back some heavy hitters for its March 18 season finale (8/7c, ABC Family) — and we’ve got the pics to prove it.

Not only will Alison tell the girls everything that happened the night she went missing, but viewers will get to see flashbacks from that fateful evening, including a new scene between Ali and the late, great Ian Thomas. In a new batch of photos released by ABC Family, the two are seen arguing in the woods, right before someone (Ian?) buries Alison in a not-so-shallow grave.

We’ll also see a new flashback of Ali canoodling with her ex-boyfriend Ezra — I can’t believe I just typed that — and judging by Ali’s wardrobe, it appears to be the same night she went missing. (What?!)

Last, but certainly not least, is Noel Kahn. Rosewood’s finest pair of eyebrows will make a present-day appearance during the finale, though his purpose for speaking with the girls is still unknown. It can’t be good, though, considering there’s a picture of him making a sketchy phone call. (I’m merely assuming the phone call is sketchy, but given his history, I don’t think that’s too much of a stretch.)

It also looks like Ali will finally come out of hiding, and will even have a heart-t0-heart with Spencer, who’s been openly suspicious of Ali’s behavior as of late.

Browse all 24 pics from the Pretty Little Liars finale below, then get to theorizing: What did Ian do that night? Why is Noel being sketchy? And what has the girls so spooked? Go on, comment away! 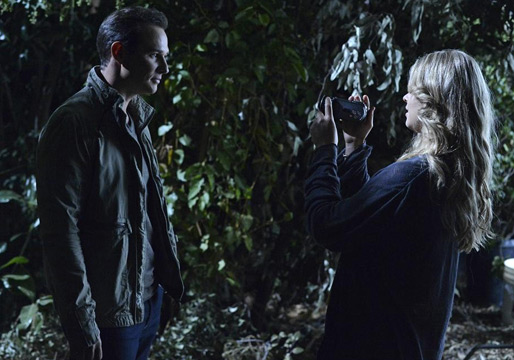