It’s a strange new world when Once Upon a Time returns on March 9 (ABC, 8/7c) with Emma and Henry now on their own in New York City and the residents of Storybrooke contending with a Wicked new foe.

Having been privy to an early peek at the show’s winter premiere, TVLine is sharing some scoop on what to expect:

RELATED | What Makes Once Upon a Time‘s Wicked Witch So Wicked? Plus: Is Emma Dorothy?

1 | Emma and Henry have made a very nice life for themselves in NYC, complete with a snazzy new wardrobe for the bail bondswoman. Also, Chris Gorham’s (Covert Affairs) character is a very big part of their world.

2 | Hook is relentless in his quest to make Emma believe the fantastical truth, and he’s got a couple of tricks up his leather sleeve to help him convince her of her origins. There’s also much comedy to be found in his (mis)adventures in the city.

3 | Flashbacks to one year ago reveal how the denizens of Storybrooke landed in a very convenient place once back in the Enchanted Forest, where they ran into multiple familiar faces — some of whom withhold a huge secret.

4 | Everyone will stick together in their travels in the Enchanted Forest — except for one character who forges out on his/her own.

5 | Someone gets locked up.

6 | Regina takes drastic measures to deal with the pain of missing Henry — while Snow White tries to play wingman for her frenemy.

9 | Multiple pieces of Once Upon a Time iconography make a triumphant return.

10 | There will be “monkey” business. And suffice to say, these winged primates have more (and scarier) “teeth” to ’em than Margaret Hamilton’s ever did. 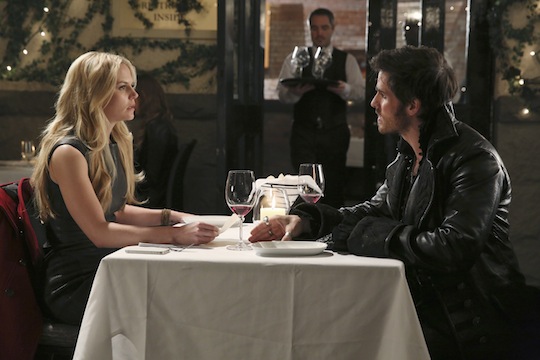