Of the myriad characters Bobby Moynihan has portrayed on Saturday Night Live over the past five-and-a-half years, a gay white ex-con rapper is (probably) not one of them. But FX’s animated comedy Chozen, which makes its official premiere Monday, Jan. 13 at 10:30/9:30c, affords him just that opportunity.

“I like [FX’s] Archer a lot, so I think the animation alone made me very excited. And then once I heard Method Man, Danny McBride and the Eastbound & Down guys were involved, I was like, “Yes. Whatever it is, I’ll do it.”

As the series opens, Chozen is living a mild-mannered existence, performing with pals Ricky and Crisco and Phantasm (voiced by End of Watch‘s Michael Pena, stand-up comic Hannibal Buress and Method Man). But when he catches Phantasm in a compromising situation, said frenemy frames him for sordid crimes, landing Chozen in the clink. After serving a dime, Chozen is rarin’ to resume his music career, though from the very bottom ladder rung, eventually reteaming with Ricky and Crisco.

Chozen’s sexuality, though touted in all the show’s headlines, “is not a big deal to him,” Moynihan notes. And in fact, it’s alluded to often and seldom with circumstance. “He is a gay, white rapper, but that’s not what the show is about. The show is about Chozen trying to get rap domination. And I like that that’s how they deal with it. It’s not that crazy of a thing anymore, and it shouldn’t be.”

Since the process of voicing an animated series rarely finds any two actors actually recording their lines together, Moynihan’s hope is that, in success, Chozen‘s cast might one day congregate for a public table read – or even more.

“Because almost every single one of the characters vaguely physically resembles the [voice actor] — except for maybe Kathryn Hahn — my dream is that the show does well enough that we can do a live-action episode” — though Moynihan acknowledges he’d have to do more than grow out the facial hair SNL makes him keep gone. With a nod to Chozen’s prison-jacked physique, he laughs, “Yeah, I’d have to work out a little bit!”

Speaking of his SNL home: Moynihan shared with us below the inside story on some of his recurring characters, as well as weighed in on his favorite hosts and new cast member Sasheer Zamata. 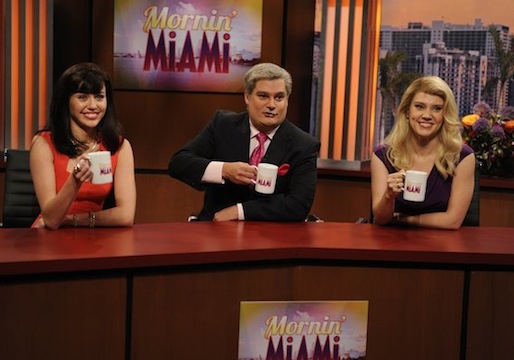