The Lying Game‘s Alexandra Chando will make like Miley Cyrus in the Jan. 20 episode of ABC’s Castle, and we’ve got pics from the episode, which also promises to surface an issue for betrothed Kate.

PHOTOS | Winter TV Spoiler-palooza! Your Scoop-Filled Guide to Castle and 30 Other Returning Faves

In “Limelight,” when a young pop star is found dead, Castle and Beckett delve into the victim’s out-of-control, hard-partying lifestyle. In doing so, they meet up with Chando’s troubled pop starlet, Mandy, whom series creator Andrew W. Marlowe previously described as “a Lindsay Lohan/Miley Cyrus type … somebody who has turned from America’s sweetheart into the kind of person who might twerk on MTV.”

In dealing with this case and its look at the high cost of fame, Beckett will be forced to confront her status as the bride-to-be of a popular author. Said Marlowe, “[This episode] gets Beckett to the point where she realizes she’s a private person but she’s in a relationship with somebody who’s a public person – so how does that affect them?”

Also guest-starring in the episode/featured in the photos below are Lola Glaudini (Criminal Minds) and Kelly McCreary (Emily Owens MD), as Mandy’s mother and personal assistant, respectively.

If you like TVLine, you'll LOVE our weekly newsletter. Click here to subscribe.
Castle Sneak Peek: A Brush With 'Miley' Brings Up a 'Private' Issue for Rick and Kate 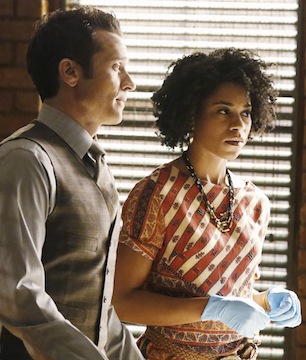