CBS’ The Good Wife is setting the stage for a 100th-episode clash of the titans/ex-lovers, and we’ve got a handful of photos setting up the showdown.

But first: In Episode 99, titled “Whack-a-Mole” and airing this Sunday, Alicia tries to hold a website accountable when its commenters get out of hand (imagine!), while Will goes against Diane’s wishes and hires Damian Boyle (Vegas‘ Jason O’Mara), an attorney with ties to organized crime. And somewhere in that hour, Will and Diane have cause to set foot in the Florrick/Agos office for the first time. (What, no housewarming gift?)

Then in the acclaimed drama’s milestone outing, “The Decision Tree,” Alicia learns that the late Matthew Ashbaugh (again played by John Noble, in flashback) bequeathed her millions (I smell premium photocopier paper for the new firm!), but “LG” contests the will. Meanwhile, Damian (silly, silly boy) tries to get Kalinda off his tail — yet in the photos below, he seems quite happy having her close by?

In that can’t-miss 100th episode (airing Dec. 1), “There’s going to be a whole act where [Alicia and Will] use what they know about each other from their love affair in a courtroom battle,” series cocreator Robert King told TVLine. “They’re going to basically undercut each other every step of the way.”

If you like TVLine, you'll LOVE our email news alerts! Click here to subscribe.
Good Wife First Look: Will and Diane Visit the Enemy Camp, Jason O'Mara Cozies Up to Kalinda 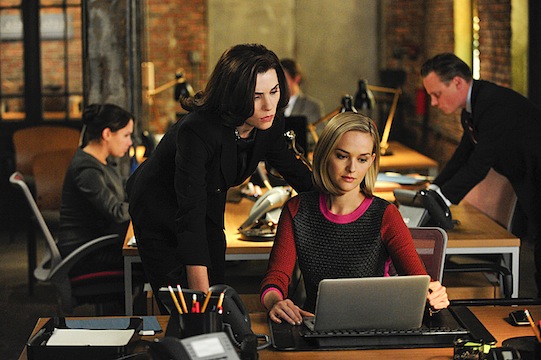