This Sunday, ABC’s Once Upon a Time travels back to Storybrooke, where things aren’t quiet as one might think.

As previously reported, the show will rewind a bit to when Rumple, Emma et al first set sail for Neverland, leaving Belle in charge of protecting the sleepy Maine burg. Ariel will eventually surface in Storybrooke, sent by Rumple and Regina to help Belle locate an artifact the Dark One can use to trump Pan.

But it appears that just as Beauty makes friends with The Little Mermaid, two men — ID’d in captions simply as “keychain” and “glasses,” and played by James Immekus and Matt Kane — stir up trouble, lashing the lasses together. A possible clue to their identities: Freya Tingley, who last season guest-starred as Wendy Darling, also appears in the episode.

Meanwhile in Neverland: Emma, Neal and Hook try to ignore the tremendous amounts of awkward as they journey to Dark Hollow to find and hopefully capture Peter Pan’s shadow.

I’ve captioned some, though not all, of these preview pics.

If you like TVLine, you'll LOVE our email news alerts! Click here to subscribe.
Once Upon a Time First Look: Storybrooke Drama for Belle and Ariel, Neal/Emma/Hook and More 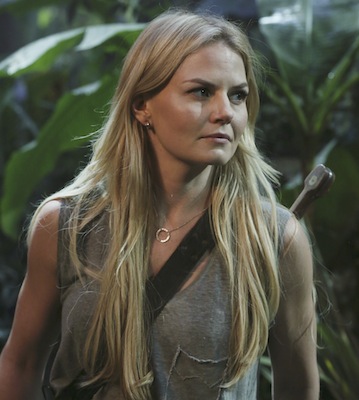