It may not be a Halloween episode per se, but Castle‘s Oct. 28 outing presents a scary scenario nonetheless: Rick’s little girl gets her own place, with Pi — and we’ve got a sad little series of photos commemorating the occasion.

Series creator Andrew W. Marlowe has described the hour, titled “Get a Clue,” as “a really fun, delightful, classic Castle episode that has a touch of National Treasure and The Da Vinci Code” — as pertains to the Case of the Week. But on the homefront, Castle must wrap his noodle around the fact that Alexis and Pi (played by Molly Quinn and Myko Olivier) are officially playing house.

Surveying Alexis’ breakneck-paced relationship with the fruitarian, Marlowe says, “Given the fact that her dad just got engaged to this other woman [Kate], we here don’t think it’s a coincidence. So we’re going to be watching how that tests Alexis’ relationship with her father, which has always been quite good. It definitely puts a new strain on it.

“It feels like new and really interesting territory — Alexis growing up and now Castle having to grow up, too, to be there for his daughter,” he continues. “Like any father dealing with a daughter who has a boyfriend, it’s always a bit of an adventure.” 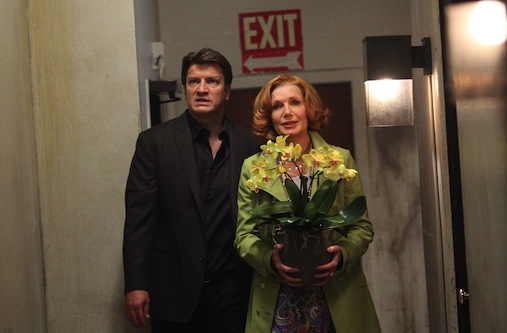