Jake Ballard may be down, but he is not out.

ABC’s Scandal last week plucked Olivia’s ex-lover (played by Scott Foley) out of “the hole” and deposited his beaten, bruised self on her doorstep — just as she was reeling from both dodging the MistressGate bullet and an intense reunion with her father (aka the man who was lording over Jake’s fate).

But in what psychological state is the B613 castoff as he is thrust back into Liv’s life?

RELATED | ‘Ship Shape: How Your Fave Pairs From Scandal, Grey’s and Other Shows Are Faring

“It’s so interesting, because we know how Huck is now, after being in the hole for so long,” Foley, who is now a series regular, tells TVLine. “We saw him before that, and then he was in there for a long time — he was deprogrammed and forgot his family and all that. But Jake wasn’t in there quite as long. I’m sure it will affect him at some point, but so far not yet.

“His facial hair is a little bit longer!” the actor adds with a laugh.

One thing that definitely has not changed for Jake are his feelings for Kerry Washington‘s Olivia, with whom he was enjoying a warm romance before his voyeuristic secret got out and then 31 flavors of other hell broke loose. Returned to the outside world, what are his intentions with regard to the beautiful fixer?

Rekindling that flame “is sort of Goal No. 1 for him right now — or Goal No. 2, aside from figuring out B613,” Foley says. “In his eyes, repairing and restoring the relationship with Olivia is a huge priority.”

Of course, two is company but three still portends to be a crowd when it comes to Olivia’s love life, assuming that she has yet to wash the leader of the free world out of her hair. Further muddying matters may be new intel about Jake’s past with Fitz (Tony Goldwyn), which acquired a dark undertone when B613 boss Rowan (Joe Morton) shared with Cyrus the details on the Navy buddies’ top-secret Operation Remington (which Foley previously teased here).

“We’re going to learn a lot more about the relationship between Fitz and Jake, which is really important in this story,” he says. “They were military buddies and friends prior to Jake being in B613 and obviously prior to Fitz being president, so there’s a lot of good stuff to explore.”

That said, Foley this season won’t be sharing scenes with only Washington, Goldwyn and Morton. “There are still a few people I haven’t been thrown in the sandbox with, but I’d say seven out of 10 of them, I’ve now worked with,” he reveals. “It’s a good thing.”

Also a good thing: A total of 13 photos from Jake’s reunion with Olivia. Also, vote in our poll below!

If you like TVLine, you'll LOVE our email news alerts! Click here to subscribe.
Scandal's Scott Foley: Jake Getting Back With Olivia Is a 'Huge Priority' (See 13 Reunion Photos) 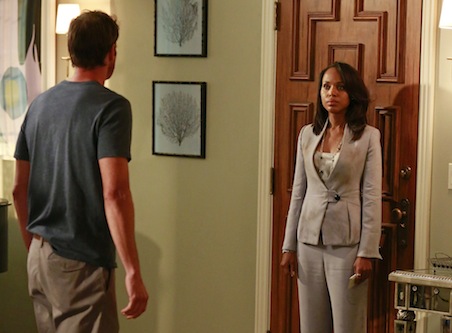