Southland‘s Officer John Cooper has been promoted to Sergeant. That’s the good news. The bad news is he’s been reassigned to the zombie apocalypse!

The Walking Dead has tapped Michael Cudlitz to join the Season 4 cast in the pivotal comic book role of Sgt. Abraham Ford, TVLine has learned exclusively.

Introduced in Issue 53, Abraham — an Army man and sports coach before the outbreak — becomes Rick’s right-hand man and one of the group’s most essential defenders.

Cudlitz has been shooting on location in Georgia for weeks, but, remarkably, his casting has remained under wraps — part of an elaborate covert mission to preserve the announcement for today’s Walking Dead panel at New York Comic-Con.

“I was laying low because [Abraham has] a very iconic look,” explains Cudlitz, who was approached by the AMC smash last spring (shortly after he wrapped work on what would turn out to be Southland’s series finale). “It would be very easy for somebody to put the pieces together if they saw me strolling around [near the show’s set.] So I was staying very close to the hotel. And I didn’t hang out with any of the other castmembers.” There still isn’t much Cudlitz can reveal about the gig, except that he will turn up at some point in Season 4 (by our calculations, probably around midseason) and, much like his comic counterpart, “Abraham is someone who comes with a lot of emotional baggage. And he’s on a mission.”

And although he’s coming in as a series regular, Cudlitz knows the drill: There is little to no job security on The Walking Dead, unless your name is Andrew Lincoln.

“There’s no guarantee of how long or how short it will be, which is one of the things I actually find pretty exciting about the job after being locked into Southland for so many years,” he admits. “But [Abraham] is very important in the comic, so I imagine even if it IS short, it’ll be bright.”

Before you hit the comments with your reaction to this epic casting news, here are 10 more comic book-based Walking Dead characters whose arrival we anxiously await. (Additional reporting by Misha Solomon) 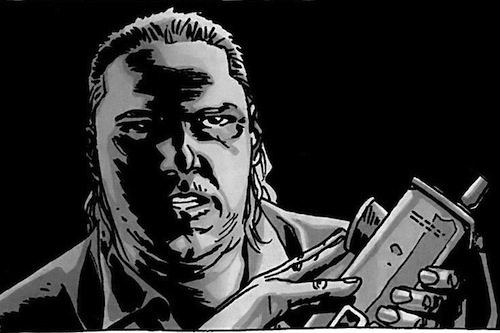