In the season premiere “Whiskey Tango Foxtrot,” an explosion at a D.C. event results in a casualty connected to the agency, which in turn changes DoD investigator Parsons’ perspective on Gibbs & Co. “Colin Hanks (as Parsons) comes back for the first episode and really does a fascinating turn, which everyone, I think, will get a big kick out of,” says show boss Gary Glasberg.

VIDEO | NCIS Season 11 Sneak Peek: Ziva’s Wanted Dead — Is This Goodbye for Her and Tony?

Meanwhile, DiNozzo and McGee — without badges and with Ziva AWOL — investigate the explosion as civilians, despite the case’s threat to harm each and every one of them.

“The way that we are jumping off into this new season is classic NCIS — and by that, I mean it’s about change and turmoil, everything being turned inside-out and upside -down,” Weatherly reports, alluding to, among other things, castmate Cote de Pablo’s imminent exit from the role of Ziva. “If you’re a casual viewer, if you’ve watched every single episode, or if you, like, watched one episode with your Uncle Morty, you’ll want to watch this premiere and the first few episodes, because this season does something it’s never done before, and that is interesting.”

RELATED | NCIS Boss: Why We’re Not Killing Off Ziva

Here now, photos from the premiere, featuring Gibbs, Parsons, DiNozzo, McGee and his new girlfriend Delilah (played by Big Bang Theory‘s Margo Harshman), Abby and others. If you want more scoop on NCIS, email insideline@tvline.com and your question may be answered via Matt’s Inside Line.

If you like TVLine, you'll LOVE our email news alerts! Click here to subscribe.
NCIS Sneak Peek: 'Classic' Season Premiere Is Full of 'Change and Turmoil' 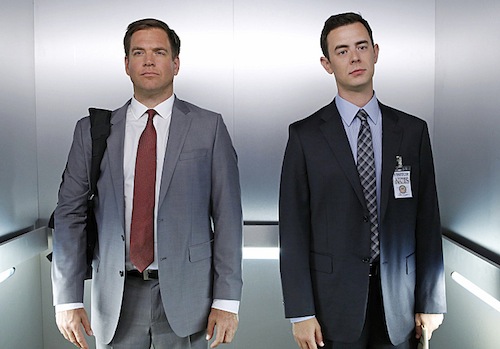