While Scandal‘s calling card may be the on-again, off-again romance between super-fixer Olivia Pope and the married President of the United States, Shonda Rhimes urges you not to mistake that storyline as a ringing endorsement for illicit liaisons.

Case in point: Just this month, David Zabel, an executive producer for the new ABC drama Betrayal — which significantly centers on a married woman’s romanticized affair with someone else’s husband — conceded it’s “a challenge” to make your female protagonist a cheater, yet argued, “They’ve overcome it on Scandal. They’ve overcome it pretty well, as far as I understand.”

That people root for Olivia (played by Emmy nominee Kerry Washington), however, is quite independent of whom she is bedding. “I don’t feel like we’re making adultery acceptable. We weren’t setting out to make adultery OK,” Rhimes says of the Betrayal comparison. “To me it’s not about adultery or not adultery. We’re telling the story of these two characters who very specifically have this kind of relationship.” ‘Olivia should go off and find herself somebody who’s single.’

“I like the fact that everybody feels this big debate. That’s fantastic, because that’s the point,” Rhimes concludes. “We’re not giving a judgement on it one way or the other.”

RELATED | Why Scandal Stars Are Rallying for an Even Better Season 3 — Plus: 28 Teases for the October Premiere

In fact, one would think — though it is never prudent to make predictions in Shondaland — that Olivia’s relationship with Fitz has had a barrel of ice-cold water dumped on it, seeing as in the Season 2 finale she was very publicly outed as POTUS’ paramour. (Fitz meanwhile, when last seen, had his head cradled in wife Mellie’s lap, after Olivia said she needed to leave his side and be a gladiator to her associates.)

Echoing that which Bellamy Young told us earlier this month, Rhimes previews, “When we come into the season, Mellie does have things managed on the marital front. But I think Fitz and Liv have an inexplicable attraction to one another.” She cryptically adds: “People may be surprised to discover what certain motives are in the situations they’ve been working in.”

RELATED | What Happens Next On Scandal: Will Olivia’s Pop Get Quizzed? And Who Tattled?

In other words, while Rhimes declined to survey the path that Olivia and Fitz’s roller coaster of a relationship would take this season (which opens with a run of 10 episodes, followed by a springtime blast of 12) — as she explains, “We always end an episode in one place and by the time you reach 20 minutes into another, we’re in a completely different place” — she did allow this much: “It’s not finished.”

We asked each Scandal series regular to offer three random words (or phrases) to sum up the Oct. 3 season premiere. Click through this gallery to see who said what.

If you like TVLine, you'll LOVE our email news alerts! Click here to subscribe.
Shonda Rhimes: Scandal Didn't Set Out to Make Adultery OK (That Said, Liv/Fitz Are 'Not Finished') 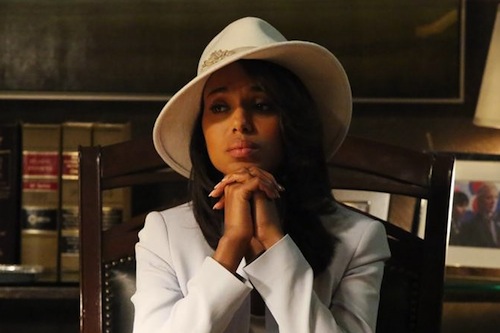