Oh how I wish I could yell “April Fools!” But instead, I’m just yelling, “FOOL!”

The fact that Blankens thinks there’s an Idol fan on the planet who wants yet another year of “Yo, yo, yos” and “For me for yous” from TV’s human barnacle is a troublesome indicator that he’s as befuddled as a Kardashian sister faced with the question, “Would you like us to turn off the cameras?” I mean, at this rate, Fox and Fremantle media might’ve been better off hiring a blanket — yes, I mean a thick, rectangular piece of wool fabric — instead of Blankens. (At least the blanket wouldn’t have been able to utter the Avada Kedavra-esque, “Let’s get Randy’s agent on the line.”)

Anyhow, since the return of the Dawg — as well as Jennifer “Hi, baby!” Lopez — seems about as likely to reverse Idol‘s ratings slide as, say, trying out a Senior-Citizens Only season, I feel like we need to rally the Idoloonie Nation and suggest some real, actionable steps that Blankens & Co. can take to draw eyeballs back to The House That Kelly Clarkson Built. I know, I know…”real, actionable steps” is never going to win out over “quick, surface fixes,” but indulge me by clicking through these 10 slides anyway, won’t you? When you’re done reading, hit the comments with your own suggestions — as long as they don’t include, oh, getting Ellen DeGeneres back on the panel, too.
Follow @MichaelSlezakTV 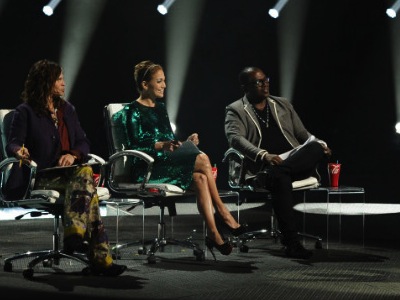