I know this is a supposed to be a recap of So You Think You Can Dance‘s Season 10 Top 12 results night, but at least 50 percent of my fingers have become possessed by the urge to turn it into a plea to the producers of Dancing With the Stars.

Wait…hold on…we have a tiebreaker. My left index finger is voting for the latter option, and since I’m a hunt-and-peck typist, here goes my tangent (set, coincidentally, to the tune of Harry Nilsson’s “Without You”)…

Oh wait, hold on one more sec. My brain is sending down a veto and cutting this musical madness short. [Slezak, you’re supposed to be a professional! Rein it in! Write your recap! Or no midnight cup of Great Grains, understand?]

OK, OK…let’s cut to Top 12 results and a rundown of the week’s routines — but bear in mind I’ll be back overnight to update this post with photos and mini reviews of every routine (and possibly some more Alan love):

SENT IMMEDIATELY TO SAFETY
Jenna (Why The Face, Nigel?!)
Nico (based on what?! the number of girls who squeal for him?) DANCING FOR THEIR LIVES
Tucker: A frantic “look ma, no hands!” display of throwing everything against the wall and hoping something might stick
Amy: An emotionally draining bit of contemporary — set to a Lara Fabian tune, in French! — that left the front-runner collapsed in a heap when she finished
Malece: Um, I kinda already forgot what she did.
Alan: So much wicked, hip-swiveling deliciousness (pictured), I almost had to reach for the smelling salts. (“From the Dmitry Chaplin School of Shirt-Wearing!” giggled Cat.)

ELIMINATED AT THE END OF THE SHOW
Alan (NOOOOO!) and Malece (Sorry, but with Tucker’s knee infection preventing him from competing this week — except for his solo — should’ve been cause for elimination) 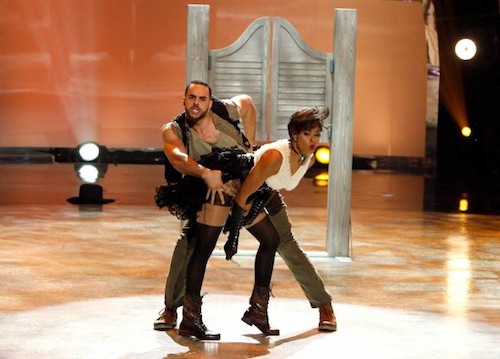