It’s a mystery as perplexing as Mary Murphy’s mystical “gold leaf” upholstery dress, and as troubling as the sea of blank-eyed Nigel Lythgoe masks shown during the “National Dance Day” segment, but I feel oddly detached from Season 10 of So You Think You Can Dance (aka My Reliable Summer Reality Addiction).

Has it been one Sonya Tayeh relationship piece too many? Is it a case of runaway front-runners (Amy and Fik-Shun, obvi) who somehow seem above serious criticism — and beyond catching by their competitors? Do we need a Russian Folk Dance or some Disco or a Waacking exhibition to refuel the tank? Perhaps I just need a guarantee that Dancing With the Stars has already hired my beloved Alan Bersten for their fall lineup (the better to relieve tension when he keeps winding up in the Bottom 3)?

I can’t put either of my left feet on it, but how about this radical suggestion to shake up the next couple weeks of competition? First, a Top 12 Week in which Uncle Nigel employs only new choreographers. (Heck, to make it even more interesting, why not draw from a pool made entirely of former contestants?) And second, take a cue from American Idol and give us one — but only one — theme night, where all of the remaining dancers must perform in the same style (say, Hip-Hop or Ballroom or maybe even Bollywood). It might give us a chance for serious head-to-head comparison before we’re down to just eight or ten hoofers — and basking in the glow of the All-Stars.

Anyway, maybe that’s just my vicious summer cold speaking — I’ve now progressed to the “fever with chills” portion of this infection. And because I seriously need to sleep for like 72 hours straight, let’s cut to the Top 16 results and a rundown of the week’s routines:

BOTTOM 6 (BASED ON VOTES FROM LAST WEEK)
Alan
Curtis
Niko
Jasmine
Alexis
Makenzie
(What the what? I ranked Makenzie and Jasmine among last week’s Top 3 routines!)

DANCING FOR THEIR LIVES
Alexis: A routine that lacked content at the start, but gained momentum with some nifty en pointe work before finishing out a little sloppy

Jasmine: An explosive, very sensual piece set to a swampy Dianne Reeves blues jam. This gal might have a future as a choreographer — if female contestants ever got invited back as choreographers, that is.

ELIMINATED AT THE END OF THE SHOW
Curtis & Alexis

BEST OF THE NIGHT | Jasmine H & Aaron (Justin Giles, Contemporary) A really intriguing piece of choreography danced to absolute perfection. Jasmine’s vulnerability as she offered her final apple to Aaron was mesmerizing, and I love how he played out a range of moods — aggressive, hypnotized and ultimately dismissive in the final heartbreaking scene.

BEST OF THE NIGHT (RUNNER-UP) | Hayley & Leonardo, subbing for injured Curtis (Miriam and Leonardo, Argentine Tango) Could this chick become a front-runner paired with someone other than Curtis? ALSO: How hot would it be to see her partner with Alan?

WORST OF THE NIGHT | Jenna & Tucker (Luther Brown, Hip-Hop) Luther’s giggles from the audience at the end of the piece said it all. The duo certainly didn’t own the hard-hitting style, and it’s a stretch to say they borrowed or rented it, either. Tucker looked almost mortified by the booty-slap sequence, and while Jenna got a little more down and dirty, her perky facial expression was all wrong.

WORST OF THE NIGHT (RUNNER-UP) | Makenizie & Paul (Sonya Tayeh, Jazz) I know the judges loved it, but to my eyes there was almost no sexual chemistry happening in what was a rather salacious routine. A serious step backwards for the pair I’d been thinking was Most Likely to Pull Off an Upset Over Amy and Fik-Shun.

WIDEST GAP BETWEEN PARTNERS | Malece & Alan (Jonathan Platero, Salsa) Sorry, judges, but Alan DOMINATED that! His physical strength on those lifts was awesome, and he handled the speed and hip action in a way that looked effortless. Seeing how Nigel and Mary called out Alan for not keeping up with Malece in Hip-Hop last week, I felt they should’ve done the same (in reverse) on this salsa. But nope, Nigel loves his pixies, so it’s never gonna happen.

MOST IMPROVED| Alexis & Nico (Sonya Tayeh, Contemporary) There was a lot of fire and maturity from these two that we haven’t seen previously — and a new sense of elegance from Alexis. That said, it was still her time to go.

MOST IN NEED OF A NEW SHTICK (EVEN IF IT’S NOT ENTIRELY THEIR FAULT) | Amy & Fik-Shun (Christopher Scott, Hip-Hop) I know Amy and Fik-Shun aren’t responsible for choreographing their own work — and therefore can’t really be faulted for an overabundance of adorableness week in and week out. But might I point out that, for a dance set to “Let’s Get It On,” there was still a bit of brother-sister vibe and a lack of adult sexiness. And that can’t all be put on Christopher Scott’s shoulders.

If you like TVLine, you'll LOVE our email news alerts! Click here to subscribe.
So You Think You Can Dance Recap: And Then There Were Twelve... [Updated] 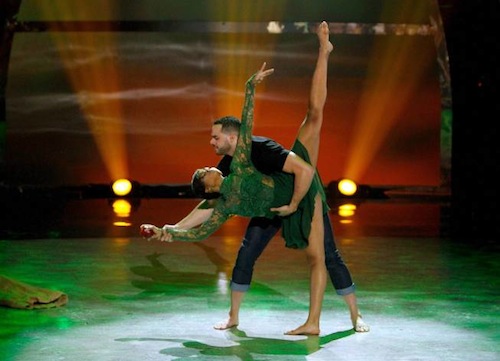