When TNT’s Falling Skies returns, it becomes clear that much has happened in the seven months that have elapsed since the events of the Season 2 finale — and TVLine has a first look at a new poster that drives home the newly realized stakes. Plus: Get a first look at a new (yet “familiar”) enemy with whom the humans must battle.

RELATED | Hot for Summer: Your Handy Guide to 125 Premieres and Finales

In the action-packed, two-hour Season 3 premiere (airing Sunday, June 9, at 9/8c), President Tom Mason, Weaver and the troops discover in the midst of a mission that the kids who have been harnessed by the Espheni (aka “fishheads”) ultimately absorb their dorsal parasite and transform into ruthless soldiers, if not tended to in time. As such, this Season 3 poster warns, “Battle Them Or Become Them.” (Click to zoom.)

Also: In the slideshow below, you can get a first look at the jazzy new tech that the Volm (the “bubbleheads” that arrived on Earth in the season finale) have given the humans to extract the harnesses, and see for yourself what one of the aforementioned child warriors looks like.

Will you be tuning in for Falling Skies Season 3? 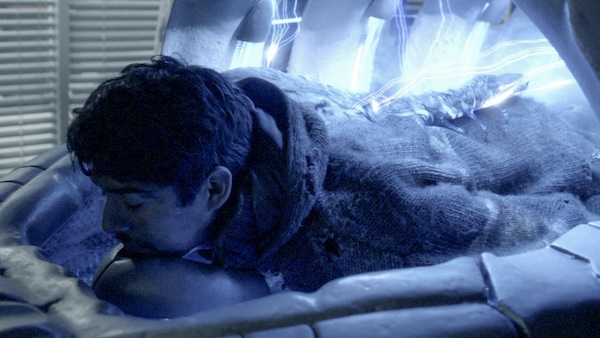