Already TVLine has hit you with the bold-faced highlights and headlines from the Once Upon a Time panel held Sunday at PaleyFest 2013 and moderated by myself.

But for those who 1) were not in attendance, 2) didn’t catch the LiveStream or 3) simply want to relive it all over again, here is video of the whole hour-long shebang!

I’ve included, as always, a super-helpful laundry list of timestamps denoting which topics landed where. (If your Hulu player shows time remaining versus time elapsed, click on that clock and it will switch over to what you need.)

04:30 Ginny Goodwin on how dark Snow White will get — and is Lana Parrilla ready for her to bring it?
07:00 Series creators Adam Horowitz and Eddy Kitsis on mapping out Season 2
08:45 Robert Carlyle on the “saddest” part of the Rumple/Bae reunion, teases Episode 22 “game-changer”
11:00 Emilie de Ravin on the challenge of playing Belle in amnesic “limbo”
12:15 Jennifer Morrison on playing the Neal/Bae reveal, capturing so many emotions “in three seconds”
13:45 How long have the creators known Neal and Bae were the same? Did they have second thoughts as fans caught on?
15:00 Discussing the “doomed Henry” reveal (WATCH FOR: Lana Parrilla pretending to clobber Robert Carlyle when he suggests Henry’s days are numbered), parsing the seer’s words — including my Rumple impression. (Hey, Jen Morrison likes it, so… win!)
17:00 Adam and Eddy on writing Season 2 versus Season 1
18:00 Is David still itching to leave Storybrooke and go fight ogres?
19:00 Will Colin O’Donoghue’s broken leg hinder Hook’s mission? And does the pirate share guyliner with Lost’s Richard Alpert? (WATCH FOR: Colin eliciting awwwws with a pouty face.)
22:00 Can dastardly Hook be made dateable?
23:00 Josh Dallas and Ginny Goodwin on playing “protective parents” to Jen Morrison (WATCH FOR: Josh embracing his “little girl”)
25:00 Lana Parrilla reflects on Regina’s aborted “redemption tour,” the Evil queen’s “comeback”
26:30 The creators and cast weigh in on the show’s perceived “anti-adoption” agenda
29:15 Eddy and Adam preview “Welcome to Storybrooke,” which flashes back to the first days of the curse — who’s returning? Will Regina have 1980s-style crimped hair?
31:00 The latest word on August/Pinocchio’s return, Mad Hatter spin-off rumors
33:00 Talking special effects, the creators’ fave moments
36:00 Emile de Ravin previews her “racy” turn in the episode “Lacey”
37:15 Rapid-fire scoop-seeking, talking about a new realm, Greg’s ringtone, secret identities and the “next generation” of magic-makers
40:00 Season finale titles revealed!
40:30 Twitter questions about backstories to come and Bobby Carlyle’s “Bowl of Soup” joke
42:45 TVLine Reader Questions about Regina’s love life, Emma’s powers and “Rumbelle” happiness

If you like TVLine, you'll LOVE our email news alerts! Click here to subscribe.
Once Upon a Time: Watch the PaleyFest Panel -- Plus: Get a Sneak Peek at a Serious Showdown! 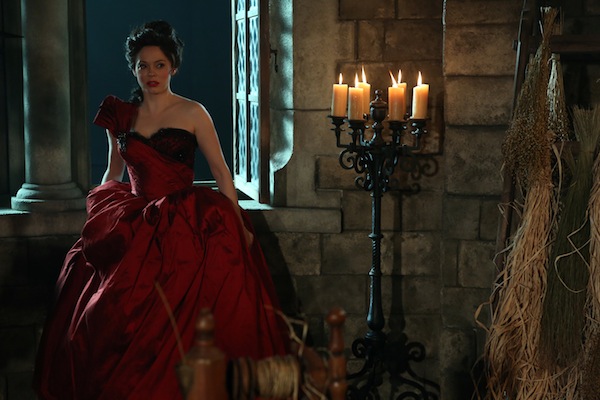