Warning: The following contains major (and majorly scandalous) spoilers from the Season 2A finale of ABC’s Scandal. Do not read until you have watched, or we’ll sic Charlie on ya.

This week on ABC’s Scandal… well, pretty much everything that could happen, did. Pope & Associates (“Bobblehead” included) scrambled to deal with their latest David Rosen problem while Olivia confronted the person responsible for the shooting. Alas, in the end nothing could keep President Grant from learning the truth about his tainted win. But what Fitz did with that information… yikes.

In this in-depth TVLine Q&A, Scandal creator Shonda Rhimes discusses Episode 13’s big (and perhaps controversial) twists, reveals Verna’s original killer and previews how soon Olivia might get her groove back. Also, on Page 2: We count down the ABC hit’s most Scandal-ous twists to date.

RELATED | What Will Make Scandal Go Boom? Get the Inside Line!

TVLINE | We always talk about “Scandal-pace” in terms of the rat-a-tat dialogue, but I also think of it in terms of how you pace the plot points and reveals. Also, you do what other show runners talk about but don’t always pull off, in that you answer a question in a way that only raises other questions. Yes, we open the hatch, but only to find a Scotsman down there. We see who was behind the rifle that shot Fitz, but is it really Huck? Do you consider those to be Scandal‘s other signatures?
That is part of what we talk about in the writers room when we talk about Scandal-pace, that part of it is the pace at which we lay out the story. With Episode 13, for instance, I was like, “This is five episodes you guys. This is five separate episodes.” We’re going to pack it all into 42 minutes and call it one episode, but in reality, this is five different episodes. Act 1 unto itself — Liv figuring out it was Verna [who had Fitz shot] — is an episode. But that’s not that interesting to us. When we got the 22-episode order [for Season 2], I was like, “We’re not going to slow the show down,” because that would change what the show is. When we were trying to figure out why Quinn Perkins was Quinn Perkins and what was going on with that, we knew that Verna was behind it. That was sort of how we started the season out, and it was more about how we were going to unfold that.

TVLINE | Did you wrestle with actually showing, without a doubt, Fitz killing Verna? Because you could have left it presumed.
You know, I didn’t. In our original pitch, we said that Huck was going to kill Verna for Liv, to keep the whole thing a secret for her. But the more we talked about it and then as the story started to unfold, I was like, “Fitz has to kill Verna.” Everyone was like, “Are you crazy?” But the more we talked about it, the more it just made complete sense.

TVLINE | Even though you were making someone who’s already an adulterer now a killer?
Is there anybody on the show who’s not a “bad” person? I feel like you watch Fitz do that and in the strangest way you feel bizarrely, incredibly sorry for him. Because to me, the very act of stealing the election somehow stole whatever it was that made Fitz innocent and good and the perfect guy to be president. They took that from him and broke him in a lot of ways. So for me, it felt right.

TVLINE | So was that act about protecting his legacy, or protecting “the presents under the Christmas tree, the Easter Bunny” and all that?
I think there was a bit of vengeance in there. There was a bit of justice. Verna did kill [White House Press Secretary] Britta Kagan, she did do some real damage, and this was his only chance to take out his rage and his anger — and his upset at them stealing the election as well. But yeah, it was also him making a choice to keep the secret.

TVLINE | Ausiello and I, and I imagine others out there now, are wondering why Mellie basically wound up getting a free pass, while Olivia got the coldest of shoulders.
If you always knew that a monster was a monster, then you don’t expect the monster to be anything but monstrous. You don’t. Mellie, as far as he’s concerned, doesn’t truly love him. Mellie is all about ambition and about power and she’s always used him as a tool to get what she wants, which is the White House. So, Mellie was just Mellie being Mellie. But the idea that Olivia perhaps used him as a tool to get to the White House, that Olivia might have been about ambition and power, that Olivia did not actually believe in him and think that he could [get elected] on his own, is a devastating truth. Because when Olivia voted to fix that election, she basically confirmed for him all the terrible things that he ever feared about himself, that his father ever said about him. It’s a much bigger betrayal.

TVLINE | Speaking of Cyrus: Where in the world did you get the idea for the strip scene between him and James, and what was the reaction from Jeff Perry and Dan Bucatinsky when they read it?
[Chuckles] I kept thinking, under what circumstances would Cyrus admit to [rigging the election]? And I kept trying to come up with ways in which they could have this conversation and Cyrus would feel safe. When I got to the point where he tells him to take off his clothes, which was kind of funny because Fitz was taking off his clothes earlier, it felt actually really real and true and right. As for the actors, when we handed this script out at the table reading, it was, no joke, still hot from the printer. And between that scene and the one where James is being chased by the gunman, I thought Dan Bucatinsky was going to die. He was like, “I’m naked and now I’m being murdered.” But at that moment, both Jeff Perry and David Bucatinsky were excited.

TVLINE | Jeff looked like he got freshly waxed for it.
Jeff Perry yelled he was going to go full-on Tony Soprano for that one. He goes, “I’m going to go full Gandolfini; I’m just going to just live naked.” And it just worked. They really went for it.

PROCEED TO PAGE 2 FOR SCOOP ON THE TIME JUMP, OLIVIA GETTING HER GROOVE BACK AND MORE 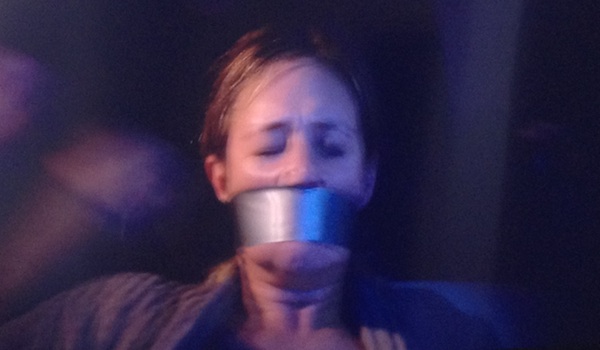