Vampire Diaries‘ search for the cure is heading off the coast of Nova Scotia! We’ve got a batch of new photos from the next three episodes, which reveal that the journey won’t be without some major romantic complications, peril and bloodshed.

But first up, when Rebekah misses yet another high school decade dance in this Thursday’s installment – the new Mayor puts the kibosh on the event – Stefan goes out of his way to throw her in ’80s fashion. Meanwhile, Kol may have a target on his back following Elena’s proposal that her brother kill him, but the Original’s not backing down and goes after someone close to the Gilberts.

Next up, on Feb. 7, it’s a trip to Nova Scotia! The search for the cure takes the gang to an island off the coast of the Canadian province, and it’s not long before everybody’s at each other’s throats — literally in one of the sneak peeks below as Elena and Rebekah continue to bicker while Stefan tries to keep the peace.

But it’s a photo from the following episode, airing Feb. 14, that has us really curious. In it, Caroline and Tyler realize they need Klaus’ help to translate the code on the Hunter’s Sword. So why is the Original hybrid lying down with a startled Tyler overlooking him?! Also, Damon has one seriously ugly run-in with a hunter named Vaughn (guest star Charlie Bewley). 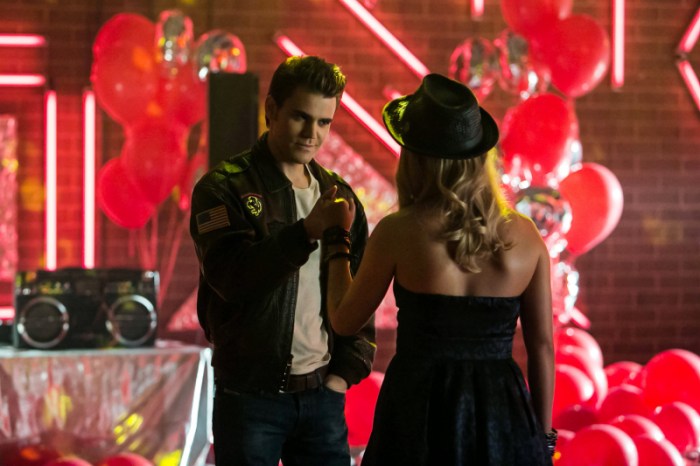