Depending on whom you ask, most members of the Fringe team have a lot to say — or at least hint at — when it comes to summing up the series finale airing Friday night. But if you ask Joshua Jackson, he boils it down to one word.

But more on that in a bit.

NEVER CAN SAY GOODBYE | In describing his mission in crafting the Fox’s drama’s denouement, which airs as the second of two episodes starting at 8/7c, showrunner Joel Wyman evokes many turns of phrase he’s used before, saying, “At the end of the day I could only look and say, ‘I’m a huge fan of TV myself. What would I really want?’ And I came up with two criteria. The first was that I wanted things to be logical and make sense; I didn’t want to use any trickery like ‘another universe pops up.’ We’re past that, and more into the emotional journey of our characters.”

Second on his list, “I wanted to be able to get into a car the next day, if I was a fan, and say, ‘I can imagine where they are now.'” Wyman’s reasoning behind that is a personal one: “I don’t like to say goodbye at all, as a person. It bothers me.” ‘CRAZY’ TALK! | How did his cast react to that very last script, for “An Enemy of Fate”? Anna Torv, at the time I spoke to her, had just made her first pass through the pages, and thus wasn’t quite ready to qualify it. “I don’t know what to say about it yet…,” she hedged with a smile. “I’ve read it, but I haven’t read it as ‘The Series Finale, Forever and Ever.’ I just read it and went, ‘Whew, OK! This is a lot of work!'”

Jasika Nicole lets a bit more of the kid inside her show through as she reflects on the finale. “It is exhilarating, and frightening, because you don’t know what’s going to happen until the very, very, very, very last moment — which is crazy!” she effused. “Just reading it, I was like, ‘Oh my god…. What’s…? OK…. How…?’ I felt like I’d taken this whirlwind of a ride. So seeing it [on screen], I can’t imagine what it’s going to be like. But visually, it’s going to be really insane — and really emotional.”

FROM 0 TO 100 | Fringe‘s series finale also happens to be its 100th episode, not the easiest of feat anymore for genre fare in today’s TV landscape. “Anytime a series reaches the 100-episode milestone, it’s an extraordinary tribute to the show and an expression of a level of enthusiasm from the fans,” Warner Bros. TV president Peter Roth observes. Reflecting on the day in August 2007 when cocreator J.J. Abrams first pitched him the series, Roth says, “I was blown away. He has such an irrepressibly brilliant mind.”

Though Abrams withheld such blatantly sci-fi (read: scary to network execs!) tropes as the alternate universe concept that would one day form Fridge‘s foundation, Roth instantly bought into what he saw as “a show about three brilliant people – including Peter and Walter Bishop, who had a dysfunctional relationship as father and son. And what all of them [Olivia included] had in common was they were all genius. Each of them manifest their genius in different ways, and it was this Fringe event that brought them together.”

A FUTURE LEGACY | John Noble, who plays the aforementioned Walter, says that Wyman pulled off “a masterful job” with the finale, adding: “I’m astounded by how good it is. I think it’s so fitting that he’s tied up five years of work into this package that is incredibly satisfying. It’s mind-blowingly good.”

After “An Enemy of Fate” fades to black and some time has passed, what might Fringe‘s legacy be? For one, Roth offers, “These are amongst the most unforgettable characters that audiences will ever be exposed to.” Also, he says, “The quality of the writing is what always distinguishes a great show as well — and in this case, the possibilities of science fact combined in a very authentic way with genre television is something I think distinguishes Fringe from all others.”

As you prepare for Fringe‘s farewell, flip through this slideshow of photos from the finale plus “revealing” pictures taken during my last, December visit to the set in Vancouver. 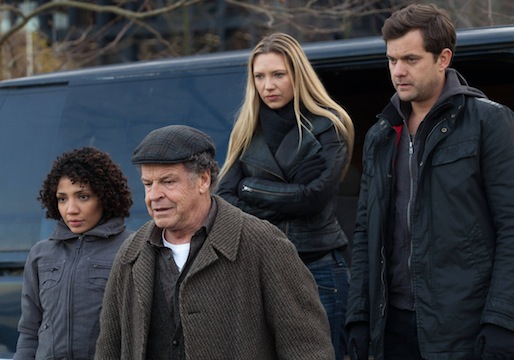