Halloween may have come and gone by the time The CW’s Arrow airs its fifth episode, “Damaged,” but that doesn’t mean there won’t be some spooky and/or mysterious creatures in the mix.

And that’s not all. The hour will center around our protgonist Oliver Queen getting arrested for murder by Detective Lance (Paul Blackthorne), and insisting to his mother that the only defense attorney he’ll accept is the daughter of the man who put him behind bars, ex-girlfriend Laurel. (Awkward!)

Things get even more complicated for Oliver after he agrees to take a polygraph, and Lance asks him if anyone else was with him during his five years stranded on the island That’s when Oliver flashes back to the time he got his first scar, courtesy of Deathstroke.

Are you excited for the arrival of this new (and masked) baddie? Who do you think Barrowman is playing? Hit the comments with your thoughts! 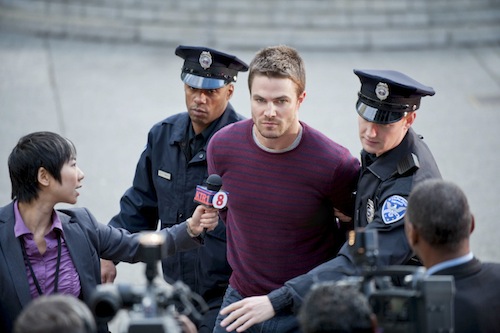