Once Upon a Time‘s beautiful Belle is going to get to know Storybrooke better — though she may come to regret doing so.

In a fresh series of photos from the Oct. 21 episode titled “The Crocodile,” Rumpelstiltskin’s honey (played by Emilie de Ravin) is seen flitting about the Maine burg, appreciating its quaint charms (and 95-cent car washes?!). As series cocreator Eddy Kitis said in TVLine’s fall preview, since Belle had been stashed away in the hospital for 28 years, Storybrooke “will probably be a strange land to her. She’s never seen a telephone before, she’s certainly never seen a television.” (Cue: Gasp!)

Alas, Belle’s stroll takes a dark turn when a knit-capped grunt drags her away. What’s behind the kidnapping? The episode’s logline surely contains a clue: “[A] reunion with an old acquaintance could prove to be Belle’s undoing. Meanwhile, in the fairytale land that was, Rumpelstiltskin attempts to save his wife, Milah, from being kidnapped by a band of cutthroat pirates.”

Will a search party seemingly comprised of Rumple, Charming and Red (is that an item of Belle’s clothing she’s getting a scent off of?) be able to rescue the pinched princess?

If you like TVLine, you'll LOVE our email news alerts! Click here to subscribe.
Once Upon a Time Photos: Belle Explores the Non-Provincial Life... and Then Gets [Spoilered]! 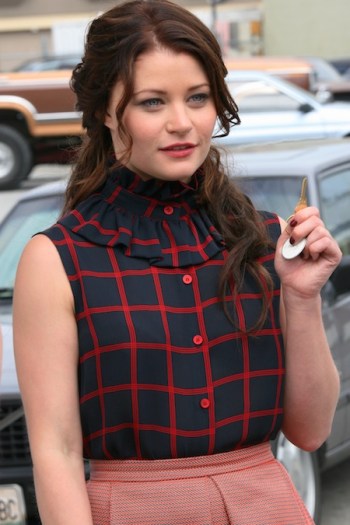