Now that the curse has been broken on Once Upon a Time, some of the denizens of Storybrooke will try to leave the sleepy town in this Sunday’s episode (ABC, 8/7c). We’ve got a sneak peek at the seven dwarves’ attempt to step past city limits, as well as the return of Sebastian Stan’s Jefferson (aka the Mad Hatter) and the introduction of Sinqua Walls as Lancelot.

VIDEO | New Spoiler Alert!: Rating the Premieres of Castle, Grey’s, HIMYM and More — Plus: Once Scoop!

Could Charming be standing in the way of an imminent escape from Storybrooke? The following photos seem to suggest he’s got an argument for staying put. This week’s installment, “We Are Both,” also gives fans another glimpse into the Evil Queen’s past, which means her wicked mother Cora (Barbara Hershey), is back on the scene.

RELATED | Who Is Once Upon a Time‘s Mystery Man? We Spy 12 Clues

Then on Oct. 14, Once presents “Lady of the Lake,” in which Emma, Mary Margaret, Mulan and Aurora team with the knight Lancelot to find a portal back home. Meanwhile, Henry has a heart-to-heart with Jefferson and tries to convince him to seek out his daughter. But the family reunion that has us grinning is the one between Henry and Grandpa Charming, as they engage in some pretend sword fighting. (The nearby lurking of Charming’s fake pops, played by Alan Dale, can’t be good, can it?) 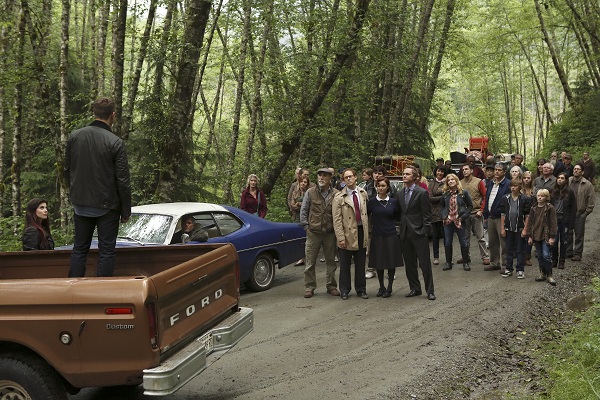