Looking for an in-depth preview of Shonda Rhimes’ fixer drama? It’s been handled.

Who is “Quinn Perkins”? Is Olivia keeping her mitts off Fitz? And hey, where’d Stephen vanish to…? Get responses to those questions and more from this Q&A with Washington and the slideshow below.

TVLINE | Let’s start off easy. How much time has passed between seasons when we pick back up?
KERRY WASHINGTON | I don’t know how specific I’m allowed to be. I’ll say more than a month, less than a year.

TVLINE | And the “Who is Quinn?” mystery is top of mind for everybody still?
We get to it right away. All summer long, strangers have been walking up to me and asking, “Who is Quinn,” which is hilarious. It had been really easy because I was able to say, “I don’t know,” but now it’s harder because we do know. We find out who she is but we still are like why, and how, and when… all of that.

TVLINE | Quinn is in fact a client as the season opens. Is Olivia as protective of her as a typical client, or even more so?
One of the things that’s really cool about the character of Olivia Pope is once you’re in, you’re in. I mean, she may be resistant to taking somebody on, but once she takes you on, that’s it. Fixing your situation becomes the priority above all else. She’s no less committed to Quinn than anybody else, that’s for sure.

TVLINE | Is the Quinn mystery more or less nipped in the bud quickly, and then we move on? Or will that thread drift through the season?
I don’t know, because when you work for Shonda you don’t get an outline of the season. Again, the major question of “Who is Quinn?” is answered, but you’re left with three or four more questions that are not solved right away.

TVLINE | I have to imagine that some “gladiators” are more vocal in wanting those answers sooner rather than later.
Yeah. What you begin to learn, as the season goes on, is that there are reasons why certain people need more answers right away and other people don’t. Even that’s complicated.

TVLINE | Quinn’s secret must be something pretty incendiary….
I was coming home from vacation when the first script of the second season came out, so I was honestly standing at baggage claim trying to plug in my phone to read it. Then once I got home, I threw the bags down and immediately opened my laptop. We were all so hungry, and it’s like that way every week. We just barely started shooting [Episode] 3 and we’re already hypothesizing about what can be going on in 4.

TVLINE | So, the big question: Has Olivia been behaving?
What does that mean in Olivia’s world? She sets her own rules.

TVLINE | Well, there’s the handshake agreement she made with Mellie in the finale. So, I ask: Has Olivia been behaving?
When we meet Olivia in the beginning of the second season she is not at the White House, and she has not been going to the White House. She’s a woman of her word. She handed in her badge.

TVLINE | How soon will circumstances necessitate some sort of an encounter between her and Fitz?
I cannot say.

TVLINE | Is it a script you’ve seen yet?
I cannot say.

TVLINE | You’re good. When that moment comes, have you and Tony Goldwyn talked about how you’re going to play it? There’s got to be a bit of a different dynamic — yet still probably 75 percent of the old dynamic.
This is a tricky one…. I’m going to answer it in a general way first, which is that all of us are always constantly talking about how our dynamics with each other get more and more complicated. What is the impact of Stephen (played by Henry Ian Cusick) leaving the office? How does that impact my relationship with the other associates? What is the impact of the Quinn question being answered? We’re all always talking about how these things play out, and Tony and I are included in that. But often, we make a decision and then we get the next script and we’re like, “…or maybe not.”
A great example is how Jeff Perry and I made all these decisions about what [Olivia and Cyrus] meant to each other and how much they loved each other. Then we got the episode where he suddenly turns into Iago and is playing Fitz and Olivia against each other in the middle of a state dinner. We were like, “Wow, OK. Here’s another layer.” Or, I remember when a new script came out and Jeff really didn’t want to read it yet because we were doing a pretty complicated scene. But I couldn’t help myself — I’m like a drug addict with these scripts — and when I came back to set after lunch, I just kept thinking, “I know [Cyrus is] gay and Jeff has no idea!” Stuff like that keeps you on your toes in the most exciting way.

TVLINE | Are we going to learn anything more about Olivia?
We are. I feel like I know her even better than I did before, but I also seriously have major questions about who she is and what she’s done, and her dynamic with some of the other people on the show. Really big questions. And there are new characters in the mix that also have made me ask about 20 new questions.

TVLINE | Is this where Norm Lewis comes in (as a rumored ex of Olivia’s)?
I can’t comment on that. But I will tell you that’s actually not even who I’m referring to. I was thinking about somebody else, somebody that nobody’s talking about. Something that’s not out there in the world at all. It’s a really important new dynamic on the show.

TVLINE | Before we go, talk about Django Unchained, the Tarantino film you have coming out at Christmas. I saw a trailer and it looked quite kick-ass. It’s sort of a spaghetti Western set in the context of the antebellum South. Jamie Fox plays a freed slave who’s on a quest to rescue his wife, played by me, from a plantation owned by Leonardo DiCaprio. It’s been a really fascinating year for me to play these African-American women on opposite ends of the spectrum in terms of empowerment, education and liberty. To juxtapose a woman who [in the movie’s setting] is considered property and three-fifths of a person in our Constitution with a woman who’s arguably the most powerful woman in the country because of her effect on the president, has been a mind-bending, phenomenal experience.

TVLINE | Does your Django character get to be active?
She’s not a Tarantino kick-ass girl; she’s not cut out of Kill Bill. I’m always reluctant to say that she’s not empowered, because here you have this whole film about two people who in this time, when they are so limited and so abused and so degraded, are still able to believe in their love and kind of rise above the institution of slavery. To me, that’s really kick-ass and it’s part of what was important to me about her. She is a true survivor, and her resilience and her belief in her own humanity astounded me every day. When I look at where I come from as an African-American, I don’t understand how anyone made it through this time. That anyone could believe in themselves and in their right to love within that context just floors me.

Now, see what Washington’s Pope & Associates peers have to say about Scandal Season 2: 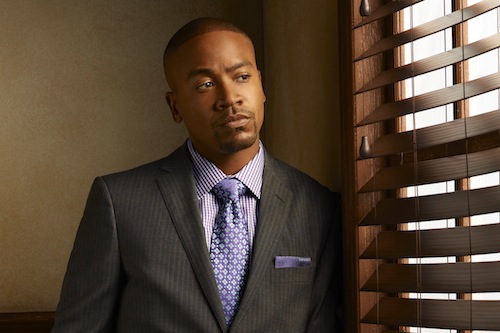