The evidence is in, and it sure looks like someone on The Vampire Diaries is about to bite it.

Now, couple that with this ominous little snippet from the official description for the Oct. 11 premiere (The CW, 8/7c): “Pastor Young (guest star Michael Reilly Burke) and the Town Council members begin rounding up the vampires and their supporters, leading to an unexpected tragedy.”

Of course, this being Mystic Falls, the sadness eventually gives way to utter terror as something — or someone — interrupts the ceremony.

FALL PREVIEW | Exclusive Scoop on New Season of The Vampire Diaries — Plus 46 Other Shows!

Elsewhere, something’s wrong with Tyler, and Caroline has called upon Stefan for help.

Flip through the following gallery and then hit the comments with your thoughts/theories. 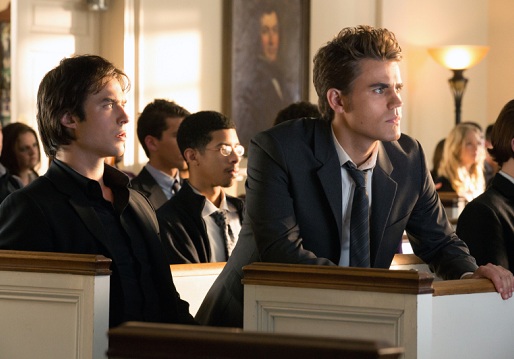