‘Tis the season for photos from the fall’s big season premieres to trickle out, including these pics from three CBS crime dramas: The Mentalist, CSI and CSI: NY.

CSI‘s Season 13 opener, airing Wednesday, Sept. 26 at 10/9c, finds the team racing to locate D.B.’s grandaughter, whose kidnapping was orchestrated by undersheriff-turned-crime boss Jeffrey McKeen. As seen in these photos — [spoiler alert!] — tracking the tyke is one thing, but extricating her from her confines may be a whole other ball of wax.

Moving to Friday, Sept. 28 at 8 pm, CSI: NY is on the case when a fire chief pal of Mac’s is killed in a blaze set off in the same style as a recently paroled arsonist, played by Numb3rs alum Rob Morrow. The notorious firebug then comes on to consult on the two-episode arc.

The Mentalist‘s Season 5 premiere (Sunday, Sept. 30 at 10 pm) has Jane trying to decipher the beautiful Lorelei’s (Emmanuelle Chriqui) connection to Red John, while the CBI team is forced to partner with the FBI — including new recurring player Ivan Sergei (Charmed) — to solve the murder of a hotel employee.

If you like TVLine, you'll LOVE our weekly newsletter. Click here to subscribe.
CBS Sneak Peeks: The Mentalist's Face-Off, CSI Tracks Down [Spoiler] and CSI: NY Is On Fire 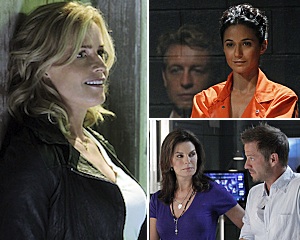