When prolific TV producer Greg Berlanti started developing a series about Political Animals — first and foremost a former First Lady-turned-Secretary of State (played by Sigourney Weaver) who is trying to get out from under her philandering husband’s shadow — he frankly had no idea where it would ultimately call home.

“It was about politics, it had a lead of a woman who’s over 30, there’s [salty] language, there’s sex…. There were a lot of reasons people were like, ‘Who’s going to make that?'” the man who previously gave us Everwood and Eli Stone recalls. “There were only a few premium cable channels we thought would take it. But I knew, I hoped, that if we wrote something that we liked and wanted to see, someone would want to make it.”

That someone would be USA Network, which is premiering the highly entertaining, compelling and more-than-occasionally juicy six-episode “limited series” this Sunday at 10/9c. As executive producer Laurence Mark (Dreamgirls) recalls, “We got lucky because when [USA co-president] Jeff Wachtel read the script, he embraced it and bought it right then.”

The network brass of course fancy themselves the lucky ones, having landed this summer’s must-see TV event. “We’ve been wanting to work with Berlanti for a while,” says NBCU Cable chairman Bonnie Hammer. “He is unbelievably talented, so when we read this it was an instant, ‘We’ve got to have this.’ This is so perfect for USA’s next step.”

Reflecting on USA Network’s long and diverse string of at-times surprising successes, Wachtel says, “Monk was extraordinary, The Starter Wife was a lot of fun, Suits has been this wonderful, wonderful show that almost came out of nowhere…. But in terms of the scope of [Animals], it’s really something special.” Adds co-president Chris McCumber: “As far as the things we’ve done… this ranks up there. And as far as the cast goes, our [other] casts are wonderful, but this collection is one of the best in television.”

And what a cast it is. Here, meet the major Political Animals and get scoop on any secrets the characters may be hiding.

If you like TVLine, you'll LOVE our email news alerts! Click here to subscribe.
Meet the Power Players of Political Animals -- Plus, How USA Network Landed the Sexy Series 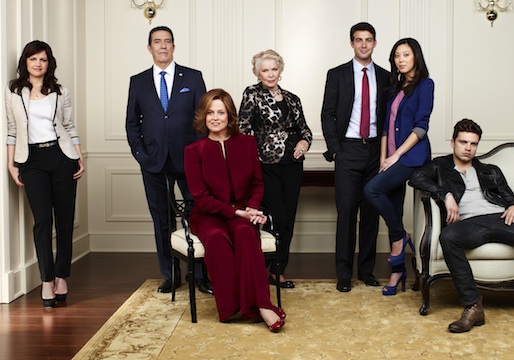