As of Monday’s finale, House is officially dead and buried — the show, not the title grump — and, in its wake, we’re left with eight years of memories and a dozen burning questions.

Now, the guy we have to thank for those memories, series creator David Shore, has volunteered to also solve — or at least address — the episode’s biggest mysteries.

So read on, then scroll down further for a photo gallery featuring highlights from last night’s swan song.

TVLINE | Was there ever a point where you thought about really killing him?
Yes. Everything was on the table. But it was considered for that long, partly because I want the series to live on. The idea of people thinking that House is dead is a weird thing to leave people with. It ultimately felt better to have him out there with Wilson doing who knows what. I thought that was a really nice thing to leave people with and to let them put their imprint on that in their own mind.

TVLINE | How did he manage to survive the floor collapsing in on him and the subsequent explosion?
It was supposed to be ambiguous as to whether the floor collapsed on him or in front of him; certainly it was nasty stuff. There are a few seconds between the collapse and the explosion. He narrowly got out the back.

PHOTOS & VIDEO | Fall Preview — Your Guide to All the New Shows

TVLINE | Was the homage to Sherlock Holmes famously faking his death intentional?
From the moment we had the idea, I was aware that that’s what Arthur Conan Doyle did and that did tickle me. We didn’t say, “That’s what Sherlock Holmes did — we should do that.”

TVLINE | Of all the cameos in the episode, which was the trickiest to coordinate/accommodate?
There were scheduling issues with everyone. It was very tricky. Because all of the actors had gone on and done really good stuff. My hat goes off to my old production crew for just physically putting that schedule together.

TVLINE | Is it fair to say that Stacy filled the Cuddy void in this episode?
I don’t want to make it seem like it was one or the other, but had [Lisa Edelstein been available] she might’ve done something [similar]. But we knew before we even had written it who we had available.

MAY SWEEPS SCORECARD | Find Out Who Died, Got Hitched, Reunited, Split Up and More!

TVLINE | I really liked how you made a point of showing that Cameron ends up happy and fulfilled in her personal life. Did you ever consider reuniting her with Chase in the end?
No, because there would’ve been too much backstory to fill in. TVLINE | How did the fire in the abandoned building start?
It’s actually alluded to. There was more about it in the original cut of the episode. There is a reference to the fact that the guy fell asleep while smoking. That’s how he got the burns on his chest. He presumably passed out while on heroin and dropped the cigarette and the fire started.

TVLINE | What was the deal with the gum Kutner put on the POTW’s shoe?
[Laughs] You shouldn’t read too much into that. That just seemed amusing to have a hallucination chewing gum and interacting with the real world.

TVLINE | Why did you choose “Enjoy Yourself (It’s Later Than You Think)” for the final scene? Ever consider using “You Can’t Always Get What You Want” just to maintain the symmetry with the pilot?
We did consider that briefly. The Warren Zevon song that we used before it, I had wanted to use that; it just felt really nice. And then Hugh [Laurie] came to me one day while we were shooting [the episode] and said, “I have the perfect song for the final scene.” So I decided to stick two songs in there. We’re all about cutting against what people think we’re going to do. So going with this weird, uplifting song [about] dying had a really nice feeling to it.

TVLINE | In the final moments, Foreman finds House’s nametag under his wobbly table. Does he know House is alive?
The notion is that Foreman had pieced it together and figured it out.

TVLINE | Lastly, what do you picture House doing once Wilson is dead?
I don’t know. That’s way down the road. And that’s not what it was about. The story is the story. And the story ends when the story ends.

TVLINE | Can you see revisiting this character in the future in some way?
I love this character. And I know Hugh loves this character. I keep it open, but the chances of that happening from a practical point of view are slim. I would hate to lock in my head, “I will never revisit this character again.” That would be a depressing idea to me. 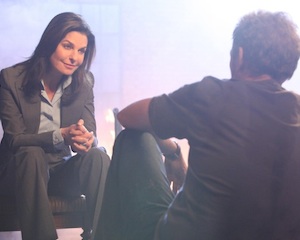