That’ll teach the rugrat to eat dessert before dinner.

As part of the first season finale of ABC’s Once Upon a Time, Emma and Regina will scramble — and even (gasp) work together — to try to save Henry, who in a desperate bid to prove to Emma what’s what took a bite out of the apple turnover made by the mayor from leftover bits of that fairytale land apple.

RELATED | Season Finale Spoilers: Scoop on 54 Big Finishes — Including Once Upon a Time!

But as seen in these photos below, what transpires there in the hospital room that leaves such looks of wonder on Regina and Dr. Whale (and apparently fires up a wind machine)? My speculation: Seeing as how true love’s kiss saved Snow from her own nasty bite of apple, the maternal peck on the noggin that Emma gives her offspring will spring the lad back to life.

And then, hopefully, she will believe. Right…?

Per ABC’s official synopsis for the season-ender, “Emma and Regina team together in order to find a way to save Henry’s life. Meanwhile, in the fairytale land that was, Prince Charming attempts to escape from the Evil Queen’s clutches in order to reunite with Snow White who, unbeknownst to him, has already taken a bite of the Queen’s poison apple.”

What are your theories on how the season will end, and what Season 2 will entail? 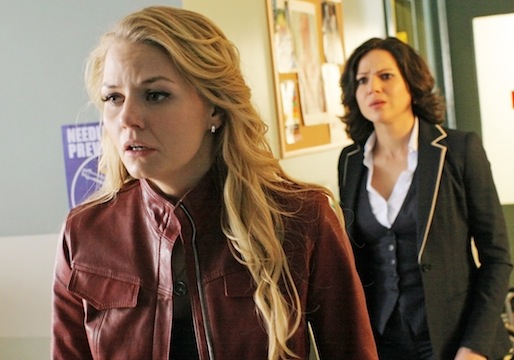