OK, so now there is this.

While the very real future of Fox’s Fringe still hangs in the balance, the network has let slip with a handful of episodic photos from the annually “out there” Episode 19, which this time around is titled “Letters of Transit.”

The title is of course a nod to the (fictional) documents that drive the narrative of the 1942 cinematic classic Casablanca, papers that ostensibly allow a person to travel freely and without question during World War II. And per Fox’s official synopsis, “the story jumps ahead to 2036 when the Observers and the Fringe team engage in a game-changing battle.”

Fox’s Fringe on the Renewal Bubble: Keep or Cut? Vote!

As gleaned from these photo captions if not the pics themselves, it seems that Walter will A) come to believe he has brain damage, B) get an injection to treat the condition and C) get help from an Old Nina along the way. And while the actor is not ID’d in the first image, it kinda looks like guest star Henry Ian Cusick, no?

As previously reported by TVLine, Lost alum Cusick and Aussie blonde Georgina Haig appear in the installment as FBI agents (the latter of which has been ID’d in pap pics as “Young Olivia”), Blair Brown has teased the introduction of “another Nina” and John Noble told us he got to play two new Walters in the installment. Meanwhile, two teaser videos (seen here and here) suggest we’ll be taking a look at an Orwellian future or reality well-populated by Observers. 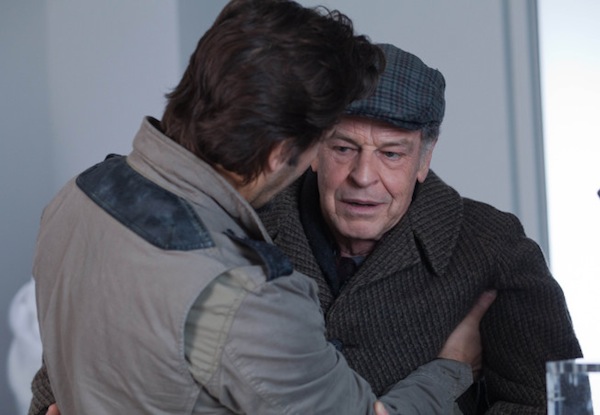