ABC’s Revenge won’t resume its frothy freshman run for another month yet, but here to tide you over is a flurry of photos from the next new episode, airing Wednesday, April 18.

In “Doubt,” says ABC’s official synopsis, “Daniel’s imprisonment sends Victoria to depths that no one thought possible, as the surprise return of a past love (played by Rome‘s James Purefoy) provides a destructive but welcome distraction from her family’s struggles. Meanwhile, Jack’s search for Amanda grows more desperate as he comes under suspicion for murder.”

Indeed, if you take a look at the police artist sketch being held by the Graysons’ high-powered attorney (guest star Courtney B. Vance), the scruffy guy in a hoodie that Jack’s own brother, Declan, saw hovering by Tyler’s dead body has become a person of interest.

Revenge! Scoop on the All-Flashback Episode, Dark Daniel, the Em/Nolan ‘Ship (?!) and More

There’s no sign of Purefoy here, but you get lots of Daniel behind bars — at times mooning over (or plotting against?) his fiancée — much of the magnificent Madeleine Stowe, and a particularly stunning photo of Emily VanCamp. But far be it for me to editorialize.
Follow @MattMitovich
// 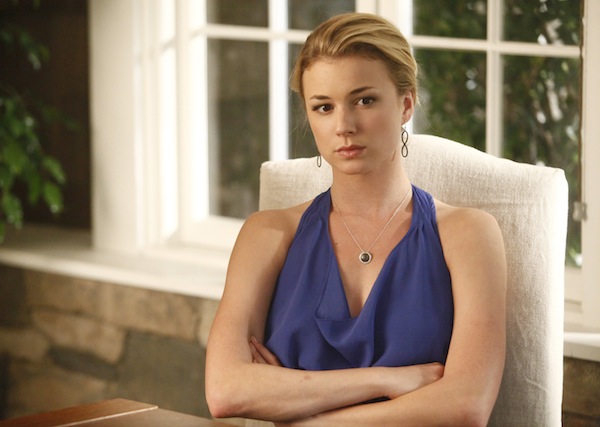