Does Castle‘s Beckett have her eye on a charming new crime solver?

As we previously reported, Spartacus: Vengeance‘s Brett Tucker will guest star as a Scotland Yard detective, and we’ve got a sneak peek of the handsome newcomer and Beckett getting all dressed up for a case.

Matt’s Inside Line: Scoop on a Major Castle Secret Revealed (?!)

In the April 2 episode of the ABC drama, Tucker’s Simon Hunt teams with Castle and Beckett to solve the murder of his friend’s daughter. When the trio becomes suspicious of the Deputy General at the British Consulate (played by Days of Our Lives‘ Charles Shaughnessy), they find themselves attending a veddy fancy ambassadorial ball. And while Beckett is a stunner in her black gown, Stana Katic told TVLine that “everybody takes notice of” her dashing escort.

If you like TVLine, you'll LOVE our email news alerts! Click here to subscribe.
Castle Hot Shots: Beckett Glams Up for a Case... and a New Man? 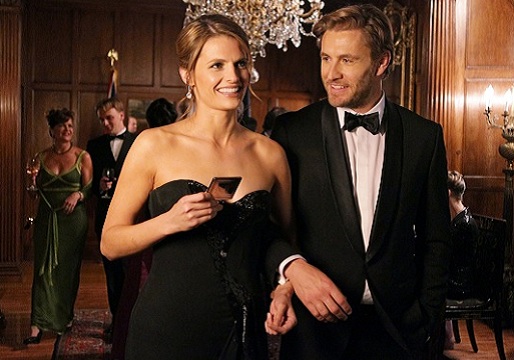