Cougar Town is about to be invaded by a whole lotta Scrubs alumni, and we’ve got your first look at the gang (minus Zach Braff) reunited on the cul-de-sac.

Sarah Chalke is already in the midst of her arc as Bobby’s gal pal when the big episode, titled “A One Story Town,” airs March 13. In it, Ken Jenkins reprises his role of Jules’ dad, Sam Lloyd’s Ted passes through town with his musical group, The Peons, and Robert “The Todd” Maschio drops by as… The Todd?! (See the green cut-off shirt and flamed bandana-looking thing for proof.) And then there’s Braff, whose top-secret guest spot is just too good to spoil.

Of course, C-Town regulars Christa Miller and Courteney Cox, as well as recurring player Bob Clendenin (Tom) are Scrubs grads, too, so the episode may as well have taken place in an examination room at Sacred Heart Hospital.

Take a peek at the photos below, and then hit the comments with your thoughts on Cougar Town‘s Scrubs-mania! 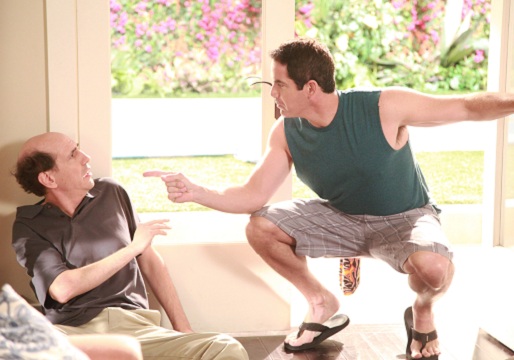