Dr. Zoe Hart’s love life is heating up on The CW’s Hart of Dixie. The New York native-turned-Alabama gal will soon be romanced by Smallville‘s Justin Hartley. But before then, she’ll give Wes Brown’s not gay veterinarian Judson another try, and we’ve got a sneak peek at the pair sharing a sweet dance.

In the Feb. 6 episode (airing at 9/8c), “Zoe decides that it’s too soon in her relationship with Judson to go to the annual Sweetie Pie Dance, so instead she makes plans to have a sleepover with Rose,” according to the episode’s official description. But clearly, things don’t go as planned because Zoe’s donning another cute dress and sharing the dance floor with her sorta-beau. Also making a surprise appearance at the event: a not-so-happy looking Wade, who’s also smitten with the petite brunette. (This girl is collecting love interest like shoes!)

Check out the gallery below and then hit the comments to weigh in on which guy Zoe should pick. 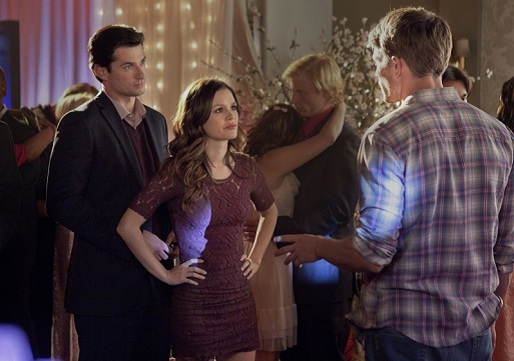