The election of a new Storybrooke sheriff is poised to be a “heated” one, seeing as it A) involves a fire and B) will find predestined sweethearts Mary Margaret and David on opposite sides, based on new photos from the next episode of Once Upon a Time.

According to ABC’s synopsis for the freshman show’s eighth episode (titled “Desperate Souls” and airing Jan. 8), “Regina and Mr. Gold play dirty politics and take opposite sides when Emma runs for public office against Sidney. Meanwhile, in the fairytale world that was, Rumplestiltskin tries to track down the ultimate power source in order to help his son avert the horrors of a meaningless war.”

Regarding the election to replace gone-too-soon Graham, Regina appears none too happy to see Henry stumping for his birth mom. (Perhaps the mayor thus arranges for City Hall to go up in flames, to discredit the interim sheriff?) Meanwhile, Mary Margaret and David find themselves foisting flyers for rival candidates — and yet they still make it look cute as all get out. Oh, and Ruby’s rocking some sex-ay red boots.

As for the flashback story, Rumpy gets the upper hand on some knights, as his son looks on. Alas in all of these pics, no sight of guest star Brad Dourif (Deadwood, One Flew Over the Cuckoo’s Nest), who’s to appear as “an old beggar.”

If you like TVLine, you'll LOVE our weekly newsletter. Click here to subscribe.
Once Upon a Time Preview Pics: Mary Margaret Clashes With David, Regina's Fired Up and More 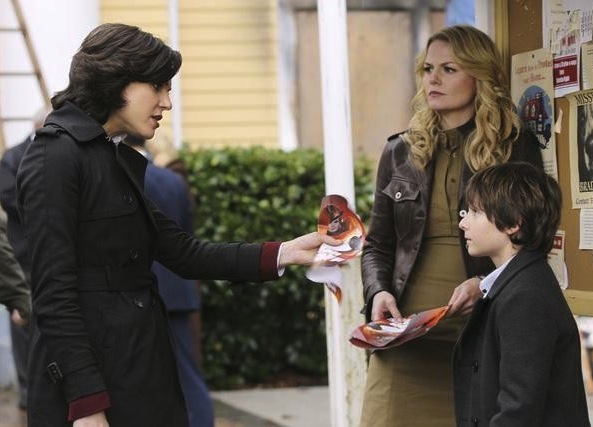